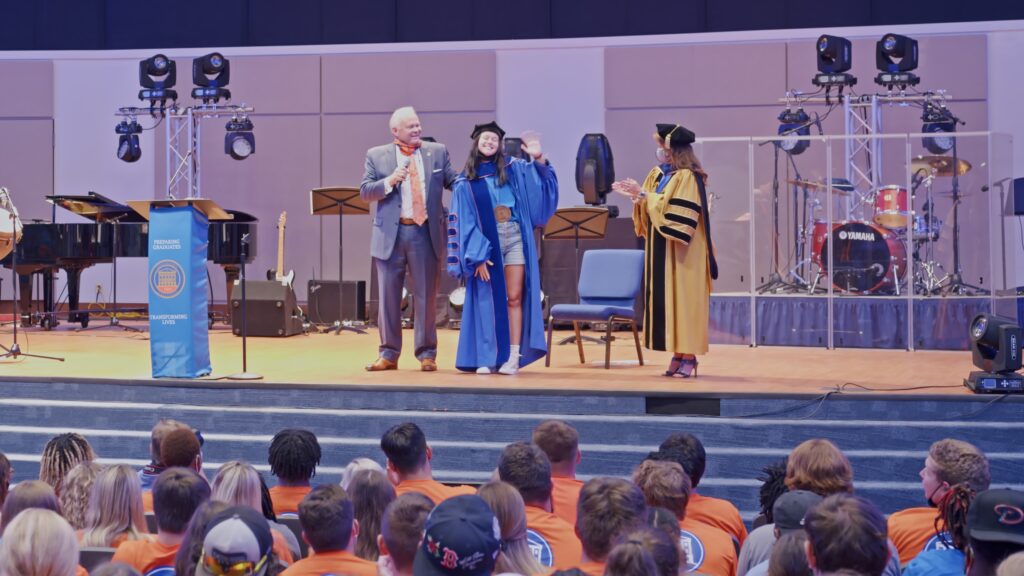 Louisiana Christian University “president for the day” Isabel “Izzy” Armand announced –facetiously—faculty pay increases and student tuition cuts—in her first order of business upon her honorary coronation in the first Chapel service of the fall semester.

The packed Guinn Auditorium roared with cheers and claps. Armand smiled at her instant popularity as the first-ever LCU student president for a day.

Her bubble burst quickly when President Rick Brewer told her the ramifications of such a decision.

“She will have an incredibly popular—albeit very short presidency,” Brewer announced, as there would be no money to run the College. Brewer’s illustration—during Freshmen Convocation—was a metaphor for the payment Christ made for all mankind.

“My illustration of granting Izzy both a PhD and Honorary President role was to demonstrate how someone (Christ) paid the price and placed her in a position of honor (PhD/President) through his (Christ’s) finished work at the Cross,” Brewer said. “All Izzy had to do was to receive the gift and step into her “calling” (putting on the robe, hood, & medallion).”

Armand, a sophomore exercise science major from Opelousas, said being president for the day was fun—but she realized pretty quickly you can’t just make decisions that are popular.

“My original answer to lower tuition and raise salaries, realistically that wouldn’t work out at the same time instantly,” Armand said.

She said if she really had to choose something that she could do it would be to help her softball team and give them a locker room update.

Armand said people all over campus recognize her now.

“The day after I was president, people started coming up to me, ‘Hey Izzy, Hey Izzy,” she said. “It’s been an honor and a great experience. Meeting even more people on campus makes me happy.”

For those who were already among her closest friends, though, they got the treat of having a specially catered luncheon in the President’s Dining Room with the menu chosen (almost) exclusively by “President” Armand.

“A funny fact about Isabel is that she hates vegetables,” Soileau said. “When Dr. Brewer asked her what menu she would like to have at the luncheon, she told him anything but vegetables!”

She chose baked chicken wrapped in bacon and macaroni and cheese. For dessert was a yogurt parfait.

“It was the best mac and cheese. This was nothing like I’ve ever eaten in the cafeteria; let me tell you. And Dr. Brewer added asparagus,” she smiled. “He said we needed something green.”

Armand, who is a Wildcat navigator this year, said she believes Brewer chose her for this honor, because she was the first to share her five core values when he came and spoke to this year’s navigators on leadership.

Her values: Pray. Read. Write. Listen. Grow. And she said she tries to do each of these every single day.

Attending college was something very important to her and her family. Armand is a first-generation student, and both her parents came from large families and were not able to afford college.

Her plan is to become an athletic trainer for a high school, then college, and she also wants to get a personal training certificate. As soon as she visited Louisiana Christian University when in high school, she knew this was where she was going to college.

“I came on a visit for softball, and it felt like home to me,” Armand said. “I met the team and Mama Jo [JoLynn McConley, the director of the Student Success Center]. Everyone was very weLCUoming.”

Armand’s adviser Sonia Tinsley, chair of the Division of Allied Health, said she is an amazing student-athlete.

“She’s just as engaged in the academic side of college life as she is the social and athletic sides,” Tinsley said. “She is a leader in the classroom as well as other areas on campus. We were so proud to see one of our Health and Exercise Science majors, Izzy Armand be named “College President for a day!”

“Isabel is a great leader because she loves to take charge,” she said. “If there is ever a problem or someone needs help with anything, she is the first person to jump to help them Isabel is a spunky, free loving person, and I am so thankful for our friendship.”