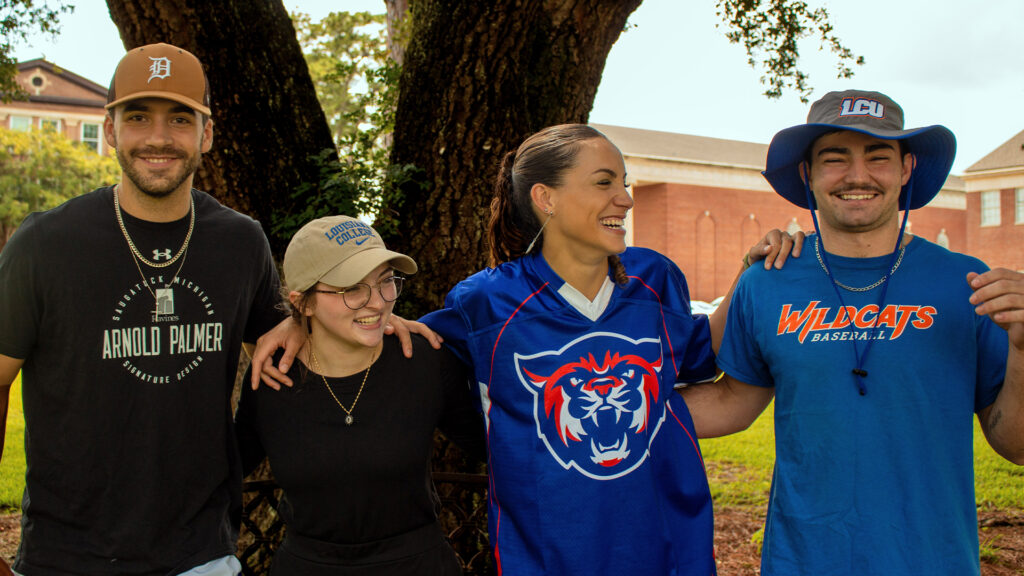 Nearly three-quarters of college students attend schools in their home states, a minority will attend neighboring in neighboring states—and a few adventurous souls will travel far away leaving behind the familiar faces and places of home.

Gross, a sophomore psychology major, hails from Lambertville, Michigan, about 10 minutes north of Toledo, Ohio. Crain, a senior communication studies major, is even further from home. He is from Northville, Michigan about 30 miles northwest of Detroit.

But how did students from a northernmost state find—and decide to venture to—a university at the southernmost edge of the country?

The answer may be as much beignets and baseball as it is the Bible.

“I had a binder of a bunch of schools I was looking at,” Gross said. “I just had a certain peace about it, every time I looked at LC. It had everything I was looking for.”

Gross said she considered Christian schools with psychology degrees from the Midwest to the East Coast.

She and her parents flew to New Orleans and drove to Pineville to visit LCU between her junior and senior year.

“It was my first time in Louisiana,” Gross said. “I really liked New Orleans. Getting beignets was my goal.”

She loved the campus—even though she said her parents weren’t crazy about their only daughter going to school a thousand miles from home. She has two older brothers.

“My parents were mildly distraught about me going so far away,” she said. “But they said ‘if you’re going to go anywhere this far we’re glad it’s here.’”

Once she arrived on campus last year, she said, people made her feel instantly at home.

Crain, who was looking at schools where he could play baseball in other states to get out of his father’s shadow. His dad Jason Crain is a college baseball coach at Alma University. Crain actually knew someone who was on the LCU baseball team, and his dad knew Coach Mike Byrns from playing against his team.

Asked about the difference between Michigan and Louisiana—she offered one word—“Wow!”

“The culture, the accents, the food,” Rivas added, “And the people are way nicer here. We are more connected to bonding. It’s so nice.”

Feeling welcomed to Louisiana and Louisiana Christian University is something all three smile about and take comfort in. Even though they are all far from home, they feel at home on campus.

“I found out she was from Michigan, and I knew I wanted to give her a warm typical Southern welcome,” Thompson said. “I bought Sydni some traditional Southern snacks as a gift for when we first moved in—some Zapp’s Voodoo potato chips and Tony’s, for example. I remember teaching her the difference between Creole and Cajun, as well as the different traditional Southern foods. It was so interesting to hear about her life in Michigan and comparing our life experiences.”

The food is definitely something Gross and Crain agree is different here.

“Everything here is meat and rice,” Gross said, referring to boudoin and many other Cajun dishes. “How can you have eight different recipes for meat and rice?”

Crain agreed on the interesting culinary choices of Cajun folks. “My roommate last week was cooking up a pan of grease!”

Drake, a business management and marketing major, said his adjustment was made in Michigan, and coming to Louisiana was like coming home.

Other things they all commiserate over—the weather, words and the insects! “The fourth week of July and the first week of August in Michigan—it’s like that weather forever in Louisiana,” Gross said. “You just sweat immediately upon walking outside.”

She also said there are a lot of terms of endearment used by people here. Honey, sweetheart, dear—are used to refer to anyone from your friend or loved one to a stranger.

“Son is used a lot here,” Crain said. “If I called someone ‘son’ in Michigan, I’m starting a fight.”

Local culture and colloquialisms may be different, but Gross said people here are happy to explain. Crain said he is still trying to understand the difference in a hurricane from a tornado, as Michigan is about as far from the Coast as a state can be.

Gross said LCU friends have taken her ‘southern training’ upon themselves and have introduced her to all things Louisiana. She has visited Baton Rouge, eaten lots of different foods and frequented Louisiana stores.

Both Gross and Crain agree, though, they miss Meijers, a chain of megastores in Michigan, that Crain said is like “Walmart on steroids.” Neither has found a store like it in Louisiana.

What they have found on steroids, however, are the insects.

Gross said the dragonflies in Louisiana are gigantic, and Crain said there are so many of them and they congregate.

“We have them in Michigan but not the size of my head,” Gross said. “And they’re not pack insects there. The insects here are a different breed.”

Crain agreed, adding they all seem indestructible. “I went to kill a roach the other day, and it was like dropping a book on a small table.”

All agreed they are happy with their second home at LCU because of the people and emphasis on getting to know others and caring about other people—being Christlike.

“There’s definitely a community and family-based emphasis on building relationships with the people around you,” Gross said, “and not just going to class.”