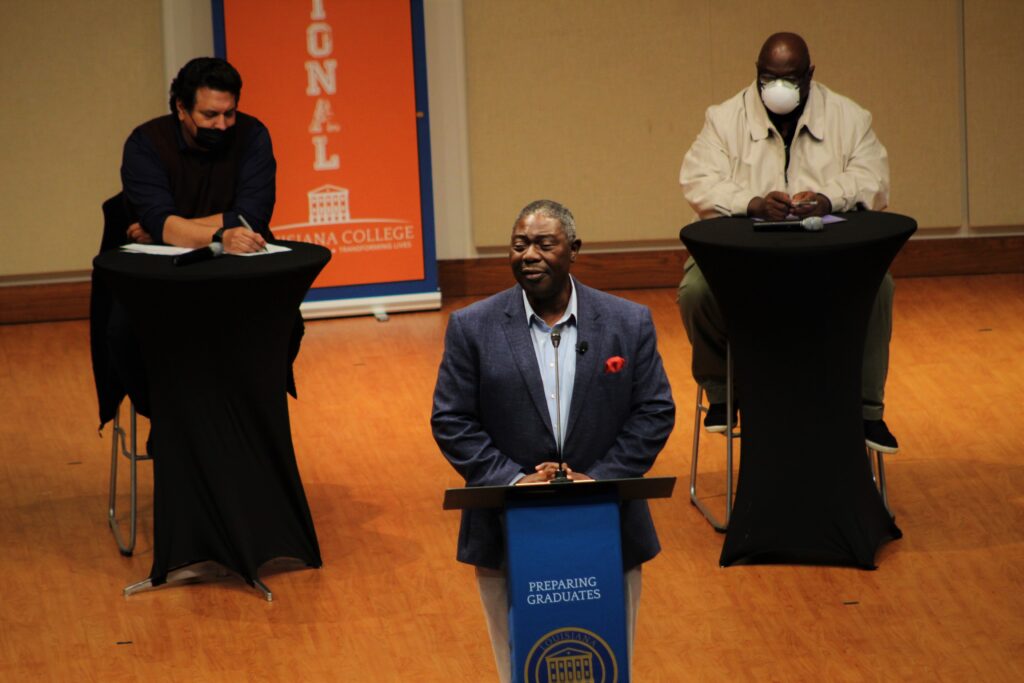 Louisiana Christian University hosted a panel discussion on diversity Tuesday, Feb. 2 to kick off Black History Month to celebrate diversity, specifically diversity on campus. LCU was recently recognized as the second most diverse college in Louisiana by niche.com.

“We celebrate the diversity of Louisiana Christian University which is expressed on multiple levels,” said President Rick Brewer. “The recent recognition from Niche.com that LCU is among a group of colleges in Louisiana that are the second most diverse institutions is a result of the desire and need for Christian education from a cross-section of society. Indeed, as the College faithfully Prepares Graduates and Transforms Lives we are equipping students for genuine leadership roles wherever their calling leads. “

The event was emceed by Dr. Joshua Dara, associate vice president for engagement and enrichment.

After Women’s Soccer Coach Carla Tejas opened the service in prayer, Johnston, an English professor, shared his thoughts on different types of diversity that are often overlooked but add to our lives.

He started his time by giving an example of how diversity can be represented by different cultures’ foods. Johnston then reiterated that diversity adds richness to life and showcases God’s goodness.

Castro, an economics professor originally from Honduras, addressed the struggle to even discuss diversity in a group of people who are different.

He explained that diversity is not an easy topic to discuss because “[people] segregate by nature” because we find comfort in being around people that are similar to us.

Purdy, an English professor and interim director of the library at LCU shared her perspectives on the history of diversity at the college and experiences during her 35 years on the faculty.

She mentioned 1967, the year that Mildred Joseph became the first black student to enroll at LCU.

She continued to mention milestones in the realm of diversity at LCU in the past and ended her time talking about the present, saying, “I am so glad we have a melting pot of students here at LCU because to me it is a glimpse of eternity.”

Johnson, a social work professor at LCU, originally from India said America has so much diversity in its culture, but he said accepting said diversity has been an ongoing struggle. He also explained that America is a place that is home to people of different cultures, languages, religions and classes.

The final speaker on the panel was Mazhambe, a business professor at LCU originally from Zimbabwe.

He shared his story coming to the United States and the discrimination he faced in other parts of the country. Mazhambe said he “never felt like a foreigner [at LCU].”

He said at LCU, “You are accepted because of who you are, not because of your color or anything else, but your character.”

Mazhambe said that we need to connect people from around the world to truly understand and appreciate diversity and in his opinion, LCU has done that.

After each panelist spoke, the floor was opened to the audience to send in questions for the panel via text. One question was, “How do you combat someone making fun of you for your race?”

Mazhambe said, “It will happen. Build yourself the ability to resist those comments…try to control your emotions.”

Castro encouraged students to know who they are and to know their worth.

“Pray for them,” Castro said. “They have the problem, not you.”

This event discussed the importance of diversity at Louisiana Christian University, allowed the audience to gain perspectives from those who may have experienced discrimination in their past because of their ethnicity or culture and educated those on how to accept the true beauty that comes with diversity.

The next Black History Month event will be a gospel concert on Feb. 23 in Guinn Auditorium at 6 p.m.