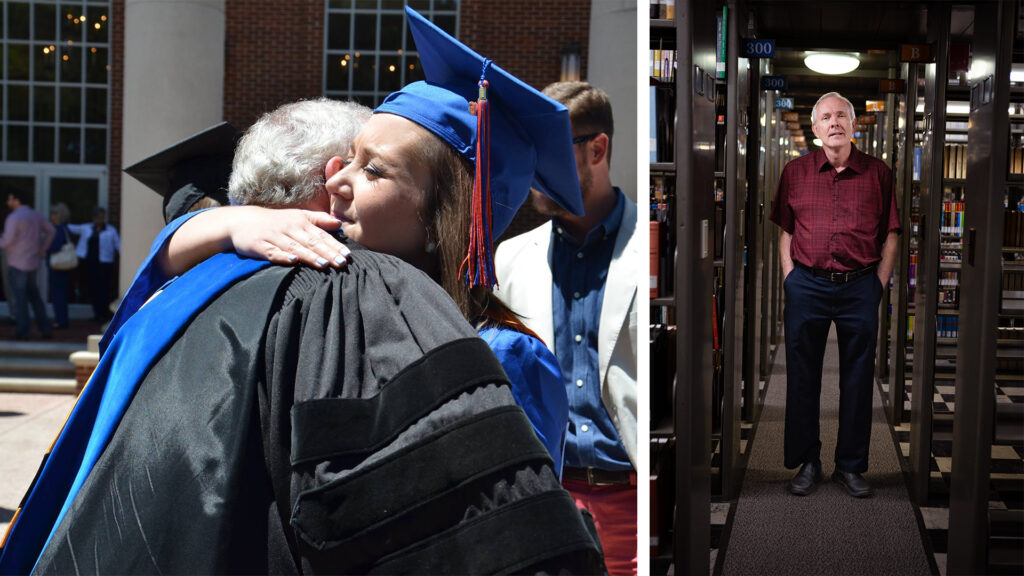 While mainstream science rejects the biblical origins of the world, Dr. David Elliott argues it’s scripture that explains the order in everything around us. In fact, it requires scriptural understanding to see the seamlessness of creation.

Elliott returned to his alma mater 15 years ago to teach and then head the Division of Natural Sciences and Mathematics, which has grown to include Computer Science. And he says even in that—he can see the order in God’s plans.

Elliott was born in Jennings but grew up in Ville Platte and came to Louisiana College in 1976 to study biology. He met the woman, Bonny Fewell, who would become his wife in line for freshmen registration outside Guinn Auditorium, he recalls.

“The E’s and F’s had to show up together back then to register,” Elliott says.

They would graduate, marry, raise a family and move across the country before settling back in Pineville in 2005. The Elliotts were married 35 years before a tragic automobile accident would take Bonny’s life and seriously injure Elliott in July 2016.

Through all his travels and his career in industry and academia, Elliott can see the ordering of his life by God. Even when he admits he didn’t quite understand it all at the time.

“Katrina and I arrived the same day,” he jokes about his arrival back at then-Louisiana College in August 2005. “I was watching the storm, everything still in boxes, but my first day teaching was Hurricane Katrina. It was a strange time.”

Before his return to Central Louisiana, however, Eliott had made his mark on the scientific world in industry.

Immediately upon graduating from LC, the Elliotts moved east to Hattiesburg, Mississippi, where David was one of the first to earn a Ph.D. polymer science chemistry at the University of Southern Mississippi in 1986. From there, he worked in research and development for several international corporations. At Unilever in New Jersey, Elliott developed liquid detergents and dental anticalculus agents.

“In my office, I could look out at the Hudson River at the Empire State Building.”

From there, the Elliotts moved to Pittsburgh, Pennsylvania, where they added two sons, Thomas and Nathan to their family, that included firstborn daughter Ruth, who had been born in Mississippi. Elliott worked for Calgon eight years developing new technologies for products. After Calgon was sold to a Chicago corporation, Elliott took a position with Gillette in Boston.

But after 25 years in industry, Elliott left it all to fulfill God’s call on his life—to return to Louisiana Christian University and educate students and future scientists—having never taught before. With a house to sell and teenage children in high school, it could have been a difficult task moving from industry in New England to a private Christian college in the South, but that was not the case.

“It was a God thing,” he says. “We sold the house making almost enough profit to buy a home here. We had no interruption in our lifestyle and no hardship coming here.”

Biology Professor Dr. Wade Warren says Elliott resigned his position in private industry to join the science faculty at a key moment in the history of the university.

“In private industry, he received numerous awards for research discoveries, but his heart’s desire was to return to his alma mater to become a professor and mentor to students,” Warren says. “Dr. Wayne McGraw, who had years earlier been a mentor for Dr. Elliott as a student, had recently retired. The transition to Elliott as the lead organic chemistry professor for LC students was seamless. Students and faculty alike have benefited from his gentle and kind ways that obviously come from his desire to be known as a follower of Jesus.”

One of his Elliott’s first students is now a faculty member alongside him.

“When I transferred to LC in 2005, Dr. Elliott was my organic chemistry instructor,” says Dr. Daniel Moore, assistant professor of biology. “He made it a point to get to know me. I was initially nervous because I was uncertain how to talk to a college professor. I transferred from LSU, where I never had a single one-on-one conversation with a course instructor.

“However, as the semester progressed, I observed Dr. Elliott and other LC professors relate to their students and quickly came to appreciate the personal attention and care. Role models like Dr. Elliott are what attracted me to the position I currently hold at LCU. As a

faculty member in Dr. Elliott’s department, I have received the same personal care and attention that I enjoyed as a student. He exemplifies what it means to be a Christian mentor and educator.”

Elliott says he now realizes that his desire to move into management would comes in God’s time—and that happened once he left the corporate arena for the classroom.

“I was in the rat race and trying to move up that ladder,” he says. “I was a successful scientist, but not at moving into management. I became a really good scientist in secular institutions and world-class organizations. Now, I know it was God’s intent for me to get skilled in science but to be a teacher.”

Elliott says he came to LCU to teach and to help God’s church and also to write and publish on science and scripture and the seemlessness of truth.

“Scientific truth is just a wing of the truth,” Elliott says.

Listening to Elliott explain certain scientific principles, one wonders why secular science treats religion as an anethema to its discipline.

With chemistry especially, he explains, the integration of faith with learning is very easy. The character of the Creator is evident in the laws of science.

“They’re seemless; you don’t even have to stretch,” Elliott says.

Elliott has spent years developing and shaping his course and book on Earth Science built around Creation.

“The Earth shows the orderliness of Creation, and it demonstrates the Creator is a God of order,” Elliott says. “And because things are ordered, we can measure them.”

That is the very definition of science.

He is finishing a book this summer that illustrates the science of Creation. He explains three distinct processes that make something ordered. First, it has separations in it.

“Creation is a series of separations,” he said.

Second, the design of something shows intent. And third, it is measurable.

“Measurement if what makes us able to do science,” Elliott says. “All three are evident in scripture. The Creation account is a masterpiece. It’s chaos, and we see the order coming into fruition. We measure it to understand the Creator.”

Elliott says this has been a journey that God has revealed to Him and how to communicate science to students in a way that is interesting.

Chemistry—with the Periodic Table, Elliott’s wheelhouse, is supremely ordered, he says, and this is evidence that God wants His people to know Him.

“And we can do that through through science,” he says. “Darwinism leaves you no hope. It ignores the order. In the laws of nature, things move to disorder. Then how did things become so orderly? How did it order itself? Someone was designing it.”

Elliott says he has been on spiritual journey since entering academia and also struggled physically and emotionally for many months following the loss of wife Bonny, who worked in LCU’s Department of Student Development for a decade prior to her death in 2016.

“She [Bonny] was finished with her assignment. I was not,” he says. “I now understand I have more to do. God has helped me cope and given me a strong sense of purpose.”

He has no plans to retire, he says with a smile, as he can’t find any reference to “retirement in the Bible.”

He said he has had to find things to do since the loss of his wife. He rises before the sun each day at 4:30 a.m. and walks the LCU circle before work.

“I don’t particularly like exercising,” he says. “But I got to reading that a 15-minute active walk every day is enough exercise. Now I do a 40-45 minute walk every day.”

“I was asking God what I could do to help LCU,” Elliott says. “I can’t do much, but I can do a little bit each day to help this place. I became joyful in simply praying and picking up trash along my walk. I don’t hold the key to solving all the problems, and I can’t make anyone donate money or make students come here, but I can do a little each day.

“God tends to inhabit very small things and make them big,” Elliott says, remarking on Jesus feeding the 5,000 with five loaves and two fish in the Gospel.

LCU President Dr. Rick Brewer says Elliott is emblematic of the professor who flourishes in a Christian university given his stellar scholarship and deep devotion to prayer and the Scriptures.

“His credentials would allow him to teach at any major research university in the world, yet he, like the rest of our faculty, have a sense of calling by the Lord to serve as professors in a university that Prepares Graduates and Transforms Lives,”Brewer said.

“His heart is for his students, and he serves the Lord so evidently in everything he does in the lab and the classroom,” Husband said. “He is a once-in-a-lifetime kind of professor who has an immeasurable, eternal impact and legacy in the students he has interacted with in his years of teaching.”

Husband earned her Bachelor of Science degree from LCU before heading to Lousiana Tech for her graduate studies. She used her studies and her own life experiences in her dissertation.

“My dissertation work was in chemical engineering,” she said. “I developed a program to individualize the dose of doxorubicin – a chemo I took for leukemia – to minimize the cardiotoxic side effects while still maintaining the effectiveness of the drug. It was neat to use my math and chemistry background to give back to the field of science that helped me survive cancer.”

She credits Elliott with even getting to this point in her own life’s journey.

“The way Dr. Elliott believed in me through my two battles with leukemia and my bone marrow transplant during my time at LC is a big reason why I never stopped believing it was what I meant to do, too,” Husband says. “ I was so grateful to have an advocate and advisor that knew me well enough to know that I wanted to keep fighting through it.”

“I remember having my first ‘C’ average in a science class my freshman year,” Husband recalls. “I came to Dr. Elliott, very upset at myself, to let him know that I didn’t think I was cut out for the science field after all. He grinned and said, ‘Why are you upset? Do you still like science?’ (to which I said ‘yes’) ‘A C is passing! You’ll get through it. Keep going.’ That brief conversation changed the way I thought of what it meant to succeed in STEM – forward motion and a calling to it, not perfection. I needed that reminder many times in my PhD work, especially as a young woman going into the STEM field.”

She says when she graduated with her Ph.D. in November 2021, one of the first things she wanted to do was let Elliott know, so she sent him the video where she is announced as “Doctor” for the first time.