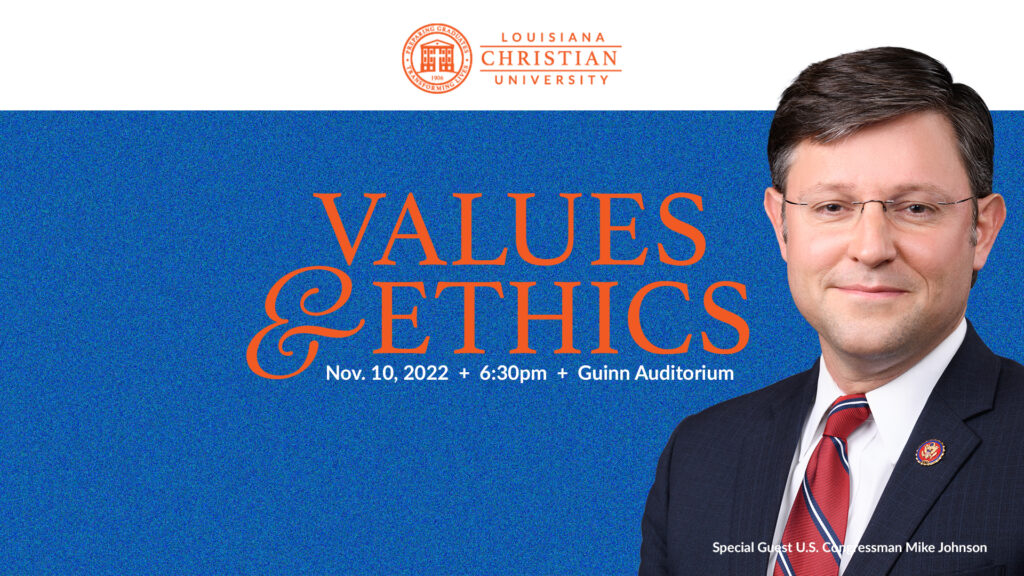 Congressman Mike Johnson and his wife Kelly will speak at Louisiana Christian University’s 7th Annual Values & Ethics Series, which will be held Thursday, Nov. 10 at 6 p.m. in Guinn Auditorium.

Mike Johnson is a constitutional law attorney and represents Louisiana’s fourth district in Congress. Kelly Johnson is a licensed pastoral counselor and teacher. Together they host the weekly podcast “Truth Be Told,” which offers an analysis of current events and topics from a Christian perspective.

“I love the idea behind the Values & Ethics Series, and I wish every university would host a similar event,” Congressman Johnson said. “There is too little emphasis on these subjects today, and the foundations of our country are being destroyed because of it. On Nov. 10, we will discuss why the founders insisted that religion and morality were essential to maintain our republic, and how we can all work to restore those pillars before it is too late.”

LCU President Dr. Rick Brewer began the Values & Ethics series to address relevant cultural issues through the lens of a biblical worldview and absolute truth, offering a response that runs counter to the secular progressive ideology that dominates most university campuses nationwide.

“During this critical moment in the life of our nation,” Brewer said, “I can’t think of anyone better equipped to articulate the challenges to our basic constitutional rights and freedoms, especially attempts to thwart religious freedom, than Congressman Mike Johnson.”

The public is invited and encouraged to attend.