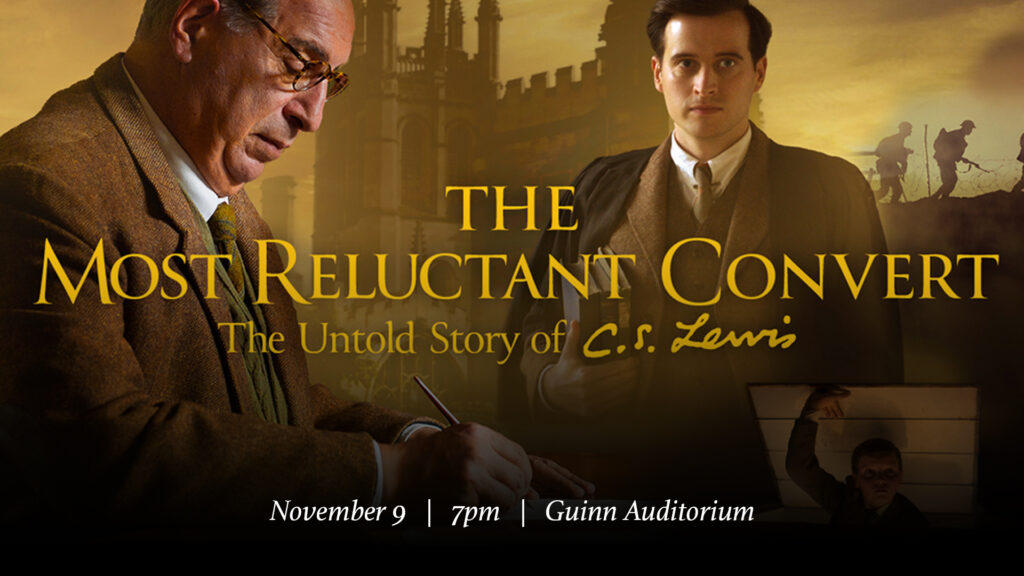 Louisiana Christian University will host a screening of the film “C. S. Lewis: The Most Reluctant Convert” for its final Christ, Church, Culture event of the fall semester.

The film will be shown in Guinn Auditorium at 7 p.m. and is free and open to the public. Registration is required.

The film C. S. Lewis: The Most Reluctant Convert is a feature film produced by Fellowship for the Performing Arts. It stars founder and director Max McLean in the title role of C. S. Lewis. The film premiered in select theatres November 2021 with an impressive performance

The mission of FPA is to produce “theatre and film from a Christian worldview to engage a diverse audience.” FPA has a particular goal of staging productions on major university campuses in its campus initiative.

Dr. Sarah Payne, director of the C. S. Lewis Honors Program, said she wanted to bring the film to LCU after seeing two of the FPA stage productions.

“I have seen C. S. Lewis: The Screw Tape Letters in Washington, D.C., and C. S. Lewis: The Most Reluctant Convert,“ Payne said. “The latter involved a trip to Dallas with a few honors students to see the program. They have a library of past performances that also include: C.S. Lewis’ The Great Divorce, Mark’s Gospel, Paradise Lost, and Martin Luther on Trial, among others.”

Payne said she has been working on getting the film adaptation onto campus for many months and now that the rights for distribution are back with FPA, the university was able to work with the company to bring it to LCU’s campus.

“I have pre-screened the film and was moved by the quality of the production and again inspired by watching the journey of C. S. Lewis to faith in Christ,” Payne said. “It was also neat watching the film as much of it was filmed on location in Oxford and included many places we visited with the C. S. Lewis Honors students this past May on our travel course to the United Kingdom.”

FPA is currently touring with a continuation of the story, a stage production called Further Up and Further In.

Address to pre-register for the event: https://www.eventbrite.com/e/cs-lewis-movie-at-louisiana-christian-university-tickets-388120227047