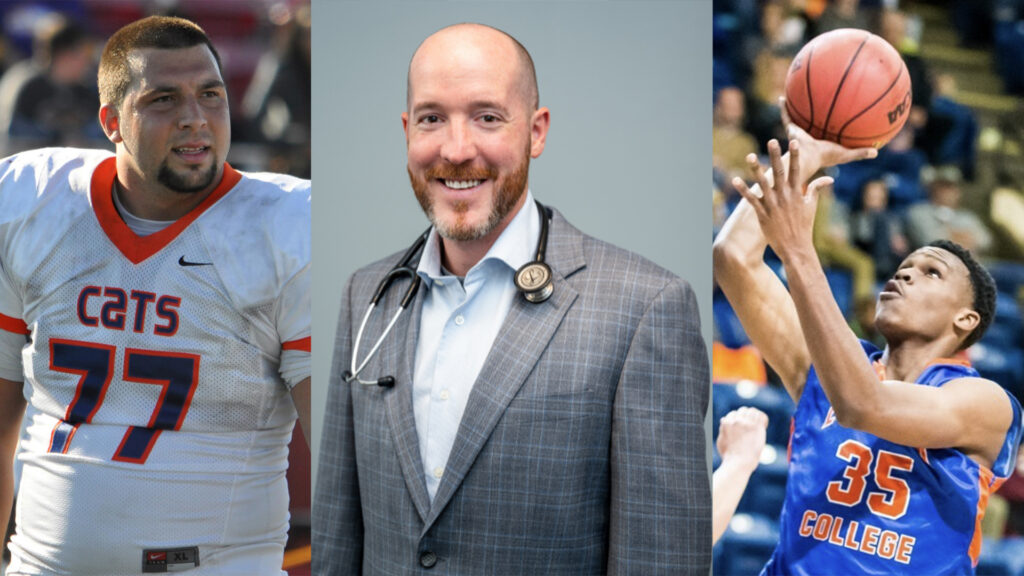 Louisiana Christian University inducted three former standout athletes into its Sports Hall of Fame Friday in the Granberry Conference Center as part of its annual Hall of Fame Banquet.

The class of 2022 included Jeremy Vujnovich, a 2013 graduate who played parts of seven seasons in the National Football League, Anthony “A.J.” Gaines, an LCU basketball player from 2012 to 2016 who has continued his career as an international player, and Dr. Blaine Broussard, a member of the Wildcats Basketball Team from 2000 to 2004 who now operates as a pediatrician in the Alexandria, Louisiana area.

Jeremy Vujnovich: Vujnovich is the only man in LCU’s recent history of football to start a game in the NFL. In fact, he started in 23 of them. His rise to the NFL is an incredible story.

The 6’-5” product from Belle Chase High School came to then Louisiana College in 2009 weighing around 210 pounds. It was during his recruiting trip in his senior year of high school that Vujnovich was given a stunning prediction from then LC football coach Dennis Dunn.

“He was like, ‘Yuni, you’re going to play in the NFL one day,’” Vujnovich recalled. “It kinda caught me off guard, but he said, ‘I’m serious. You’re gonna play on Sundays one day if you come to Louisiana College and come play football for me.’”

Dunn’s prediction would come true. Through lots of hard work by Jeremy in the weight room, that 210 became 295, and by his sophomore season, Vujnovich was entrenched as the starting left tackle. He was named all-conference honorable mention in the American Southwest, while providing blind side protection for the record-shattering quarterback, Ben McLaughlin.

As a junior in 2011, Vujnovich emerged as one of the best offensive linemen in the ASC, as he was named first team all-conference and helped the Wildcats to their fourth straight 7-3 record.

In 2012, the Wildcats took their game up a notch and earned the school’s first-ever NCAA Division III playoff appearance with an 8-2 record under Dunn. Vujnovich was again first-team all-conference and added a preseason all-American selection from the Beyond Sports Network. Bigger things were to come.

Jeremy caught the eye of NFL scouts, and in 2013, he signed as an undrafted free agent with the Green Bay Packers. He would spend two seasons with Green Bay as a member of the practice squad. But his best opportunity came two years later as a member of the Indianapolis Colts. After spending the 2016 season on the Colts’ practice squad, Vujnovich was promoted to the active roster and was named starting left guard by coach Chuck Pagano for all 16 games of the 2017 season.

“Running out on the field with the Colts, my name getting called, and you run through the smoke with thousands of people there, I can literally remember thinking back and hearing Coach Dunn say, ‘Hey Jeremy, you will play on Sunday one day.’”

A coaching change in Indianapolis meant another change for Vujnovich. In 2018, he was signed by the Arizona Cardinals. Jeremy played in five games for the Cardinals, starting two, before being placed on injured reserve. His NFL career would end in the 2020 season after Vujnovich spent the summer training camp with Washington but did not make the final roster.

In all, it was an NFL career that spanned seven seasons and saw Vujnovich play in 23 games while starting in 18.

Today, Jeremy Vujnovich is back in Louisiana, as he lives in the New Orleans area where he works as an account executive with Limble CMMS, a maintenance software company. Jeremy’s wife is Katie, and they have a daughter, Lennon, and a son, Bowen.

“I am forever grateful for my time at LC,” Vujnovich said. “It means the world to me to be put into the LC Hall of Fame.”

Dr. Blaine Broussard: The Forest Hill, Louisiana native grew up working with his brothers, father, and grandfather farming sugar cane In Cheneyville each summer until he attended medical school.

Blaine came to then Louisiana College in 2000 and was a member of the Wildcats basketball team under Gene Rushing. He became a favorite of Coach Rushing for his great attitude and work ethic.

“Not only would Blaine play hard, but he was a team person,” Rushing said. “Team chemistry is something that not everybody has, but he was so involved with helping his teammates through good and through bad, and then he continued to play hard for me and Louisiana College. I knew Blaine Broussard was going to make it because of the type of person he was.”

Dr. Broussard noted the impact of his family on his career and said that his time at LC included three majors: biology, chemistry, and basketball.

“Most importantly, I want to thank Coach Rushing for teaching me my limits,” Broussard said. “That is something every man needs to learn, and I got to learn that under him. This has served me immensely in my life, and it will continue to do so. For that, I am eternally grateful.”

After graduating from LC in 2005, Broussard attended the LSU Health Sciences Center-Shreveport College of Medicine where he graduated in 2009. From there, it was residency training at the University of Arkansas Medical Sciences in Little Rock until 2013.

He and his wife, Christine Beall Broussard, herself a former Smith Scholar and Lady Wildcats basketball player, live in Lecompte. They have 6 children – Audrey, Wyatt, Emmett, Simon, Cora and Hazel. They attend Calvary Baptist Church, where Blaine serves as deacon, vice president of the choir, and teaches pre-K Sunday school with Christine.

“I’m eternally grateful that I was able to play basketball here, while at the same time to be immersed in a Biblical worldview,” Dr. Broussard said. “While I learned basketball here, I also spent time with people, and my faith was strengthened by living and practicing with students and faculty and coaches who were devoted to Jesus Christ.”

Anthony Gaines, Junior: Known to most as A.J., Gaines finished his career at Louisiana College as one of the most prolific players in the school’s history.

Gaines came to LC from Byrd High School in Shreveport in 2012 under then head coach Gene Rushing. Rushing said that Gaines was a player who “fell through the cracks” in terms of recruiting, and he only learned about Gaines through a fellow coach while attending a high school all-star game. Rushing later attended a practice session at Byrd and knew Gaines was a player he had to have.

“I’m thinking, ‘Why is he not being recruited?’” Rushing said. “So, I sit with him in the locker room after the workout, and I said, ‘AJ, I’d like to have you come up, come visit with your family, and see what you think of Louisiana College.’ And he said, ‘Coach, I would really like to come.’”

“A chance is all I wanted, and a chance is what Coach Rushing gave me my senior year,” Gaines said. “And I thank him for that, because if he hadn’t given me a chance, I would not be speaking to you today.”

The only sticking point in the recruiting process that both men recall was that Rushing told Gaines “You’re gonna have to cut your hair.” It proved to be not much of a sticking point  though, as Gaines made his decision to play basketball for Rushing at LC.

Instantly, Gaines brought a new dimension to the Wildcats team and finished his freshman year with a 13-point, 5-rebounds per game average. He was named American Southwest Conference Co-Freshman of the Year, East Division all-freshman, and East Division honorable mention all-conference.

In A.J.’s sophomore year at LC, he finished second team all-conference with a 16-point average before a knee injury cut his season short.

But in 2014, Gaines produced one of the best seasons in school history. His 20 points and 8 rebounds per game earned him conference player of the year, co-defensive player of the year, and first team All-ASC. He was also named to the 5th team of D3 news All-American and D3Hoops.com’s 1st team all-south region.

Before A.J.’s senior season, a big change as long-time coach Rushing retired, and Reni Mason became the Wildcats new head coach. Mason knew who Gaines was, having competed against Gaines’ father in high school basketball. But the change brought a new level of success both for LC and A.J. Gaines.

“If you know anything about the Gaines family, he is who they are,” Mason said. “What do I mean by that? The way he lives his life today. The way he carries himself today is a direct microcosm of his family. They are first-rate people.”

He finished the year as one of the nation’s most well-rounded and versatile performers, as he was one of only two players in the country to average at least 18.0 points, 9.0 rebounds, 2.0 steals, 2.0 assists, and 1.5 steals per game in 2015-2016. Gaines was at his best in the biggest moments as he averaged 23 points, 11.6 rebounds, and 4.3 steals per game during the Wildcats historic run in the ASC Tournament.

“Coach Mason allowed me to continue to thrive and play the way I wanted to play for so many years,” Gaines said. “Although we may not have brought the ultimate prize back to Louisiana College, we changed the culture here, and we did some special things here.”

“He was a joy to coach,” Mason said about Gaines. “He was a young man that was very talented but needed to be pushed in areas that he thought maybe he was there, but he wasn’t. But we got through it and were able enjoy some success during his last year and my first year, and it has been a pleasure of mine to watch him move forward.”

Gaines’ basketball career was far from over once he finished at LC. He has continued to play professional basketball at the international level for the last six years. His stops have included Canada, China, Finland, and for the last two years, Japan where he’s been named a top five player and defensive player of the year.

Gaines’ spectacular ability to rise through the air with acrobatic dunk shots have also earned him the nickname “The Human Windmill.”

AJ is more than just a basketball player. He is a husband to Courtney, whom he married in 2021, and father to Ari Carter Gaines, who is now 4-years old.

Rushing said that Gains is starting his own clothing line with the help of the team he plays for in Japan.

“So, you never know,” Rushing said. “He wasn’t heavily recruited, but here we are with it. You never know which way all this thing will work out.”