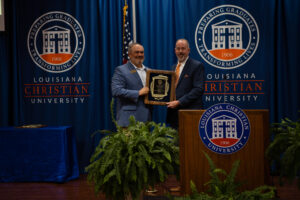 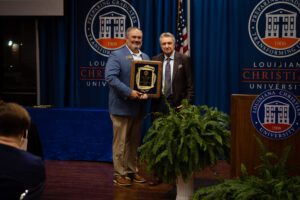 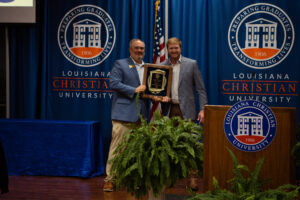 “These alums represent the best of the best who have graduated from Louisiana College (now Louisiana Christian University),” said LCU President Dr. Rick Brewer. “We stand on the shoulders of these leaders who have faithfully demonstrated character and servant leadership in their personal and professional lives. Indeed, this annual event at LCU is truly a highlight of the year.”

Larry Perkins: Perkins was raised in Pitkin, Louisiana and became an outstanding basketball player for Pitkin High School. He was recruited to Louisiana College by the legendary Coach Billy Allgood to play basketball for the Wildcats from 1963 to 1967.

He began a basketball program at LSU-Alexandria from 1977 to 1981 and was named “Coach of the Year” twice.

Perkins moved to Kilgore, Texas in 1981 as a State Farm Agent and ran a successful agency until he retired in 2019.  He excelled as a leading agent for 38 years and received many awards through the years for his hard work and dedication. Perkins was active in the Lions Club, president of the East Texas Treatment Center in Kilgore, and president of United Way in Kilgore.

Perkins remains active in his church, First Baptist Church of Kilgore.  He is a deacon and serves on the financial committee for the Nehemiah Project for Youth Program.

“Exactly 40 years ago right now, I was a 17-year-old freshman here at Louisiana College,” Fenn  said. “I’d come from Morgan City. I was very immature, overwhelmed away from home. All of those things, but I knew I was called ministry, annd I was scared of it. I didn’t want to be bored, boring or broke, so I was trying to figure it out. So, I kind of floundered around a little bit in the beginning, but fortunately, I was here, I was at LC, and I was surrounded by people that became good friends and good influences, and they love the Lord, and they hung in there with me.”

Fenn joined the team at First West in April of 1992 as youth pastor and served in that ministry for 11 years, followed by five years as pastor to the senior adults. In 2008, Fenn transitioned into his current role as Global Ministries Pastor, as he works to mobilize First West to reach the nations with the Gospel.

In the West Monroe community, Fenn is known as the public address announcer for West Monroe High School football games, as well as a team chaplain. He enjoys time with his family, hunting, fishing, golf, watching sports, and reading. Fenn and his wife Ann married in 1988 and have one son, Caleb, who serves in the U.S. Navy.

“This is a once in a lifetime thing, and it’s a great honor,” Fenn said of the award. “I’ll just say that from my alma mater, Louisiana College, hey, it’s worth it. I’m so honored to be here among all of you, and I thank you so much for this great award, and I’m so appreciative to all the people that have invested in my life to help it to be able to happen.”

Blake Cooper: Blake Cooper was a beloved business figure in the Alexandria community before his tragic death in a plane crash that also claimed the life of his brother, Ben, on May 31, 2020.

Blake’s launch into the business world came after his time as a Louisiana College student from 2001 to 2005, as he graduated with a degree in Public Administration. From there, Cooper graduated from LSU with a master’s degree in Public Administration. In January of 2007, he began work with the RoyOMartin Company as a manager of governmental relations, business development and marketing.

For Blake, state politics was a strong passion. In 2001, he started his career as a political strategist in a variety of political races in Louisiana. Working through the ranks to political director, Cooper became interested in a range of policy-related issues such as tax reform, government spending, healthcare and education. While attending Louisiana College, he worked summers in Washington, D.C. at a non-profit management company with a focus on healthcare industry. He also spent time on Capitol Hill working for multiple members of Congress like John Cooksey and Mike Johnson.

Cooper had plans to run for the Alexandria City Council and one day hoped to become mayor of Alexandria and eventually the Governor of the State of Louisiana.

Cooper was a loving husband to his wife Laura Cooper, who accepted Friday’s award on her late husband’s behalf, along with Blake’s brother, Casey.  He was also father to Mallory, Audrey, Marly Anne and Mason. His family said that Cooper loved to travel, golf, fish and hunt.

Rister received his Bachelor of Science, Biology and Chemistry from Louisiana College in 2006 and his Doctor of Medicine from LSU School of Medicine in Shreveport in 2010.

While at LC, Rister played football for four years – having started several games at quarterback but eventually transitioning to tight end, where he was voted second-team all-American Southwest Conference in 2005.

“I told myself when I was getting ready to finish high school that there was no way I was staying in Louisiana for school, I was going out of state,” Rister recalled. “(Former assistant coach) Vance Morris and another LC alum changed my mind. And, I wouldn’t be where I am or who I am today without that.”

During his training, Rister completed his Residency in Orthopaedic Surgery at the University of Alabama-Birmingham Medical Center in Birmingham, Alabama in 2015 and his Fellowship in Sports Medicine at Taos Orthopaedic Institute in Taos, New Mexico in 2016.

He is well-known on campus at Louisiana Christian University by the school’s athletes, as he has served as team physician since 2016.  Rister also serves as team doctor for other area high schools, as well as, the U.S. Ski and Snowboard Team.

Rister’s wife, Joy, is also a graduate of Louisiana College with a degree in Elementary Education and was a fourth runner-up in the Miss Louisiana Pageant in 2009. The couple has three children – James, 8, Jennifer, 6, and Julie, 3.

“Louisiana College, as you’ve heard many times tonight is affecting so many people’s lives. So, I can’t say thank you enough.”