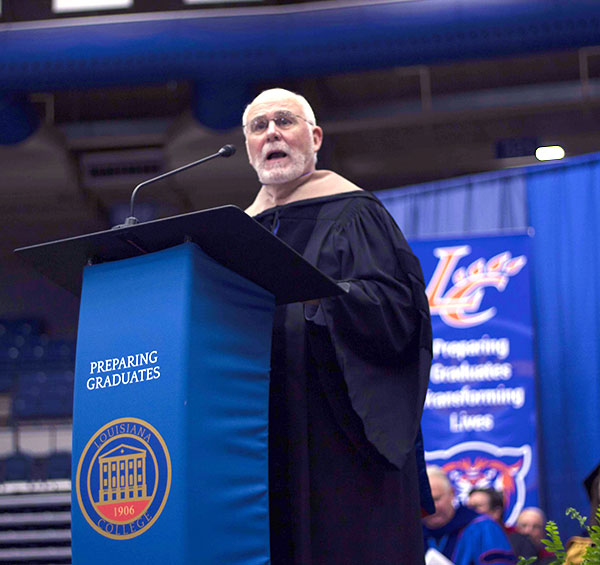 “It was my honor and privilege to get to know Johnny Martin over the past couple of years as we both loved the music of the Gaithers and clean humor,” said Dr. Rick Brewer, president of Louisiana Christian University.

“I will never forget accompanying Johnny at the piano as he led his employees in singing his favorite song — and some would say his testimony — ‘The Longer I Serve Him the Sweeter He Grows.’”

“Louisiana Christian University was privileged for Jonathan to keynote our 164th Commencement last May and was honored to bestow upon him an honorary Doctorate of Business degree,” Brewer said.

In his Commencement remarks, Martin — a long-time member of Calvary Baptist Church, Alexandria — noted an acronym that serves as a guide for RoyOMartin using the word R.I.C.H.E.S. He explained the letters as standing for respect, integrity, commitment, honesty, excellence, and stewardship.

As a generous donor to Louisiana Christian University, Martin presented a check to President Brewer that far exceeded Martin’s financial commitments to the College. He instructed Brewer to use the lagniappe for any other need. Almost down to the penny, the overage covered an expensive maintenance repair the College was facing.

“The entirety of Johnny’s gift was a God-send,” Brewer said. “But the extra amount which covered a significant expense was nothing less than God’s perfect timing because Johnny knew nothing of the maintenance issue.”

“Only eternity will reveal the full measure of Dr. Jonathan E. Martin’s influence, support, and love for service in the kingdom of God on Earth,” Brewer added. “I will miss my friend.”