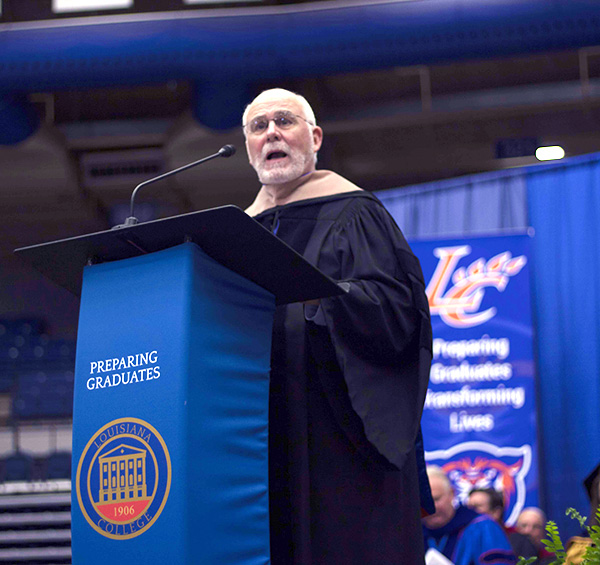 Dr. Jonathan E. Martin encourages those attending our 164th Commencement toward a life of values and compassion.

Held May 4 at Rapides Parish Coliseum, the event celebrated 250 graduates from the United States and abroad who earned various undergraduate and graduate degrees.

Louisiana Christian University President Rick Brewer reminded the students that many were freshmen when he arrived in 2015. “We’ve been on a journey together and we’ve seen a lot of changes, haven’t we? We’ve seen a lot of good things. We’ve prepared graduates and we’ve transformed lives. That’s the focus of our vision at Louisiana Christian University.”

Brewer said students had learned skills in analytical reasoning, critical thinking, and problem solving: “That’s the heart and soul of what we do at LCU.”

Such students who also have the mind of Christ are those who will readily attain leadership roles. “You are markedly the leadership of the 21st century, and I’m pleased today we can celebrate with you what you’ve accomplished.”

Keynoter Jonathan Martin gave an inspiring thumbnail sketch of Roy O. Martin, Sr., who, through dedication to God and hard work, began the family’s first business in Alexandria in 1923.

A member of Calvary Baptist Church in Alexandria, Martin cited the acronym R.I.C.H.E.S. — Respect, Integrity, Commitment, Honesty, Excellence, and Stewardship — as one that guides the RoyOMartin company and should guide the graduates.

“While this degree gives you an advantage in the job market, it is not a predictor of your success,” Martin said. “It is important to work for a company with a strong sense of values and culture. Values and culture determine a business, not profit.”

Continuing a tradition begun by Brewer in 2015, six graduates addressed the gathering.

“In the same way that Martin Luther King Jr once said that he had a dream, I too have a dream. We all have dreams. My dream is to see everyone fulfill their dreams.”

Business/Accounting major Shelby Bergeron said she grew closer to Christ at Louisiana Christian University through the influence of students and professors.

“Spiritually let me say that I can attest to God moving mountains,” she said. “There are so many people that I have seen surrender their lives to Christ because of this institution.”

Citing the impact of Louisiana Christian University’s weekly chapel services, Bergeron added, “The biggest impact I have seen are the relationships that people create amongst one another to truly show the love of Christ.”

Several athletes involved in conference playoffs did not attend the Saturday commencement. So Brewer held a special commencement for them on May 1, where he encouraged the 13 grads to prioritize God as they enter the workforce. He advised that they “live in stature” while pursuing wisdom. “And learn to grown in favor with God and man.”