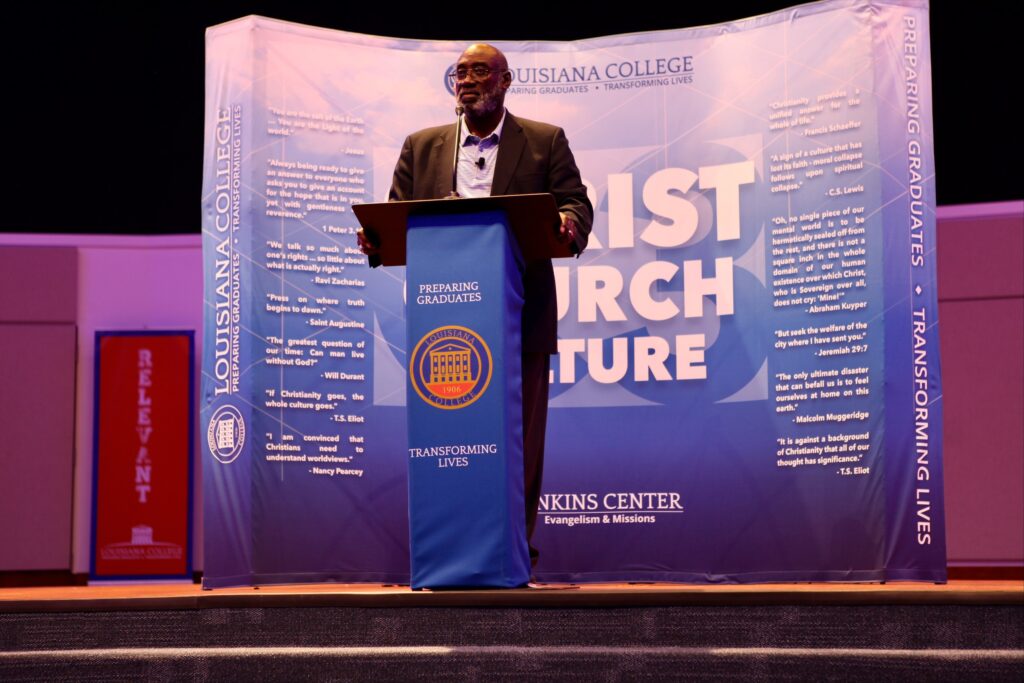 By Sierra Boudreaux and Victoria Watson

“CRT bears witness to the reality of whether or not you believe the Bible is true,” Clayton said.

Clayton spoke about the contradictions between Christianity and CRT.

Critical Race Theory is an academic and social movement based on the idea that race is nota natural, biologically grounded feature of physically distinct subgroups of people but a socially constructed category used to oppress people of color. Critical race theorists hold that U.S. law and institutions are inherently racist and function to create and maintain social, economic and political inequalities between whites (oppressors) and minorities, in particular blacks, (oppressed).

Clayton dove further into the falsehood of Critical Race Theory.

“If you buy into this, you are buying into destruction of the United States,” Clayton said.

LCU President Rick Brewer informed the audience that CRT is becoming the basis for diversity training programs, public policy and human resources development across the country.

“Equity. Social justice. Inclusion. These are CRT buzz words,” Brewer said. “Equity sounds non-threatening as opposed to neo-Marxism. But this will be the end of federalism and of free speech in America.”

The biggest problem with CRT, Clayton said, is its lack of room for Christ in the equation.

“Jesus has no place in the resolution of the problem,” he said. “If you’re white, you’ll always be white, so you can’t not be racist. If you believe that you’re dumber than dirt.

“[CRT is] saying the gospel has no power to change you. CRT has no place for the gospel.”

Critical Race Theory writes white people completely out of the conversation, Clayton said. The only opinions or solutions that matter are those of minorities. Whites have no opinion of value to right any wrongs or perceived wrongs.

“It’s just wrong,” Clayton said. “It’s just as wrong as what whites did to blacks.”

Clayton argued that CRT takes away from the real racism that still exists, and that the very real progress that has been made over the decades in civil rights will be undone by the CRT movement if Christians don’t stand up and fight this.

The directness of Clayton appealed to Jakauri Lovelace, a junior finance and economics major from Shreveport.

“He made good points on being educated on what you’re going to put out there. I didn’t know much about [CRT.]”

Zane Blanchard, a junior English major from Bellerose, was surprised and excited about how sternly Clayton spoke and was glad that someone approached the subject biblically.

Blanchard said he believes that Clayton hammered the sufficiency of the gospel for dealing with racism and racial issues.

Clayton said, “Jesus is the only answer to racism, and the only reason it still exists is people who don’t know Him.”