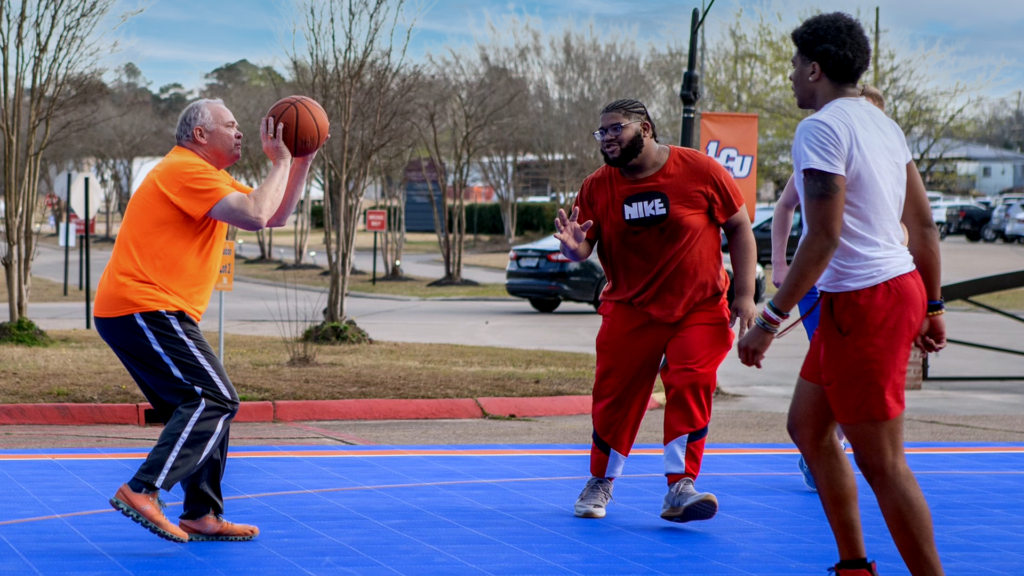 Louisiana Christian University students—and president alike—now have a new location to entertain a friendly (or serious) game of basketball—depending on who is playing.

President Dr. Rick Brewer has had a few years on most of his fellow players to develop that competitive spirit. At 65, Brewer smiles as he gets one over the reach of his 20-something competition.

“I’ve played basketball since the age of 6 so the new sport court is personally fulfilling,” said Brewer, his eyes lighting up. “I’m still playing ball at 65.”

Brewer said he has wanted to do this for several years—to have an outdoor court where students and others could get together for a friendly pick-up game.

“Once I had significant financial support for the project the wheels began to roll during the Christmas break, Brewer said.“Two alums, Blaine and Christine Broussard, were installing a similar court and because of their love and support for LCU. I asked if they would help do the same at the university, and they did. We worked with Sport Court South, a professional outdoor courts, from Little Rock, Arkansas, owned by Paul LeFleur. They were great people to work with who made sure our correct university colors and sports logo were applied to the court.”

The Blaine and Christine Broussard Sports Court dedication and grand opening will be held Wednesday, March 23 at 3:30 p.m. at the court in front of Tudor Hall.

Brothers Caleb and John Howe have been enjoying the court right alongside Brewer.

“It’s nice seeing the president come out of his way to interact with his students,” said Caleb, a senior secondary education major.” It shows he cares for us and wants the best for LCU, and the new court is awesome. It’s a nice addition to the campus and it is a place to let loose, have fun and get away from the tests, papers and stress.”

His brother Aaron, a 2021 LCU biology graduate who plans to attend medical school in the fall, echoed his brother’s praise.

“There’s no denying the basketball/competitive culture of Louisiana Christian’s campus,” Aaron said. “The court gives students another outlet to get outside, get active and compete with their peers, and playing with Dr. Brewer is always a great time. He brings an uplifting, lively vibe to any pickup game. He’s also the best pick-and-roll man, he sets some strong screens! The court gives him another opportunity to do what he does best, actively engage with students on campus!”

Female students are also getting in on the action.

Gracee Bryant a senior business administration – accounting major, said she loves that the court gives LCU students another opportunity to get outside and get active.

“I can tell already that it has been a big hit!” Bryant said. “It will be great for student organizations, activities like intramurals and ResLife events as well. It also increases the friendly competitive spirit at LCU. Even if you don’t play, coming to watch never disappoints.”

This basketball court adds another “R” to LCU’s often-referenced emphasis on Relevant, Rigorous and Relational—Recreation.

“I wanted to do this to add to campus life providing students additional opportunities for recreation and relationship building,” he said. “In the age of the iPhone, I believe students need a different ‘space’ for connection and entertainment.”

And Brewer is happy to connect on the court anytime.