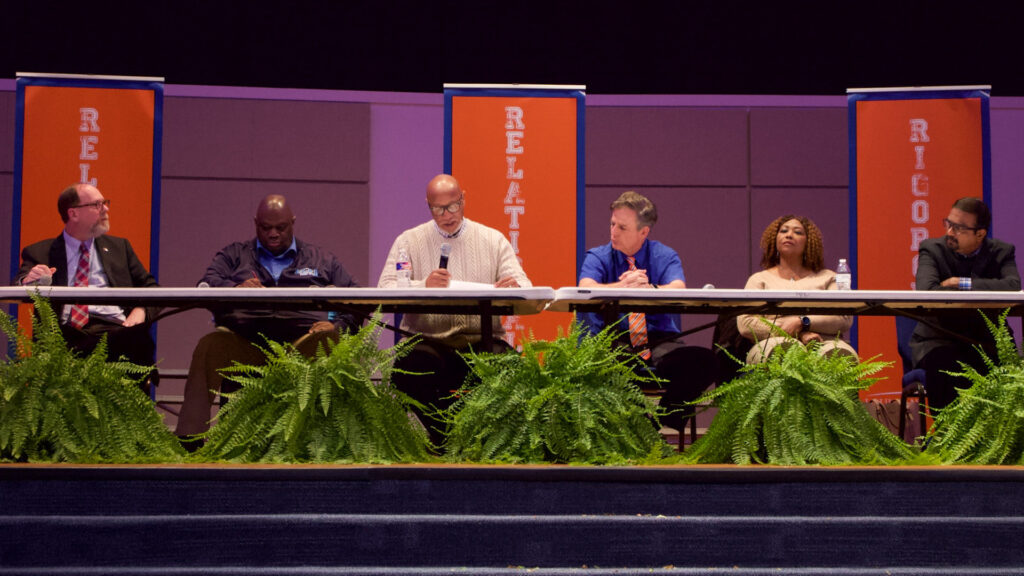 Louisiana Christian University hosted a panel discussion Thursday, Feb. 24, for Black History Month to discuss what parts of Dr. Martin Luther King Jr.’s “I Have a Dream” speech America have met and what has yet to be achieved.

The event was emceed by Joshua Dara, associate vice president for engagement and enrichment.

“I do think that in taking stock of this speech, King made tremendous patriotic appeals that are so important,” Robertson said, “and I do think that in terms of patriotism and love for the country, he wanted us to live up to our ideals. Some of it’s been done, there’s plenty that has been undone and there is work yet to be done.”

Robertson said that while plenty of King’s dreams have been done, we still have a long way to fulfill his goal for America.

Mazhambe addressed King’s goal of being judged by character over skin color. He explained that while some may look at white people as the enemy, many white people stood with King and fought for civil rights and that we should be building bridges with one another to continue to complete King’s dream because King was a bridge builder and sought to bring all people together.

“I think that if we can dispel that [judgement] and then look at each other as brothers and sisters and as people who support ideals and not look at color, we will get somewhere,” Mazhambe said.”

Pickard echoed Mazhambe and added that King and other protestors—black and white—knew they would face difficulties, but their dedication to the cause of true equality brought many others to see the importance of what they were fighting for.

He said that along with the “I Have a Dream” speech by King, other events also shifted the culture of America. He specifically discussed the march in Birmingham, Alabama.

Brown, professor of nursing at LCU, shared her story of what it was like growing up during the civil rights movement.

Brown said she remembers firsthand hearing King’s speech as a child and being “rocked to the core” that there could be equality for African Americans one day.

“The dream that Dr. Martin Luther King had for this world was a world of love, where everyone loved each other, there was no hatred,” she said. “ Everyone was treated equally. When I hear his speech, that’s what I hear. I hear a world where racism does not exist anymore.”

Brown said that hatred is not natural but is taught. She said that it is our duty as Christians and as Americans to teach others to love and care for one another. It was true then, and it is true today.

Personal relationships between people are not the only thing that we need to focus on, however. The final two panelists addressed race and society from their perspective as social work professors.

Powell shared current statistics of African American incarceration. He said that while black men constitute 6% of the population in 2022, they still make up 60% of prisoners at state and federal levels.

This is something that can’t continue to go ignored or unacknowledged, he said, encouraging students not to be afraid to discuss the difficulties of our country.

“For black males ages 18 to 35, one in three are involved in the criminal justice system,” Powell said. “More young black men go to prison than to college.”

Johnson emphasized a need for more education and understanding of diversity and its importance for everyone and every institution. He said it goes further than just race.

“The concept of diversity encompasses acceptance and respect,” Johnson said. “It means understanding that everyone is unique and recognizing our individual differences. These can be along the dimensions of race, ethnicity, social-economic status, age, physical abilities, political beliefs, and other ideologies.”

President Rick Brewer said he is proud of the recognition that LCU has received as the second most diverse university in Louisiana.

“One of the reasons that we began hosting panel discussions during Black History Month as well as symposiums on cultural issues throughout the year is for our university community to come together and learn from each other as humans, Americans and Christians,” Brewer said. “All of us have different struggles, and we need to understand what we personally may not have experienced and from that, grow in our love for others and in our own Christian walk.”

Following the panelists, students were encouraged to ask questions.

Sami Jo WeLCUh, a social work major at LCU, said that this event was essential to students as it would bring attention to how racism still affects Americans today.

“Some people weren’t raised bringing attention to [racism],” WeLCUh said. “I think it’s very beneficial for people to know about it if they didn’t.”

Students from other local colleges came to educate themselves on the topic further.

Jonathan Osborne, a nursing major at Louisiana State University Alexandria, said he believes everyone should educate themselves on this topic.

“Racism is still very prevalent in our country and we need to learn how to fix it,” Osborne said, “and this is a prime way of helping to do so.”