Louisiana Christian University Wildcats fans dot the landscape of CenLa, the state, and the nation. And with the launch of the Wildcat Club, every fan of LCU Athletics can assist the entire program or the sport of their choice regardless of location. 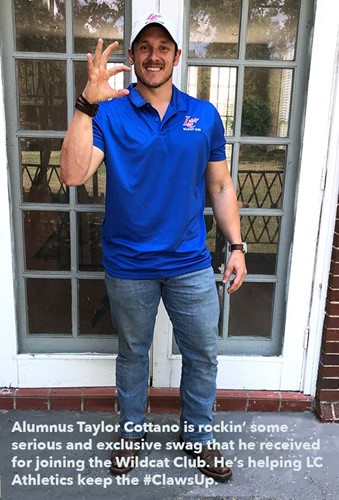 The biggest perk for joining the Wildcat Club is the satisfaction of underwriting the athletic programs that help student-athletes as they strike the balance between their studies and respective sports. Other advantages include events and access throughout the year to connect fans with coaches, players, and staff.

As the fundraising arm of the Athletic Department, the Wildcat Club will provide additional budget funds for the ongoing operational and facility upgrades to enhance student-athletes’ college experience.

“The Wildcat Club is a tremendous opportunity to invest in LCU Athletics. The dividends from these meaningful investments will serve our college and our communities for years to come,” said Athletic Director Reni Mason.

“Louisiana Christian University gave me a chance. I was a walk-on,” said former Wildcats middle linebacker Taylor Cottano (’13). “I learned some valuable lessons through Wildcats football.”

Cottano said LCU “blended my faith and my education and athletics. I am grounded in those values, and I wouldn’t trade that for anything.”

A successful entrepreneur, Cottano credits his alma mater for his business sense and for introducing him to the woman he would marry: Meggie Burkett Cottano (’12).

The Wildcat Club offers several levels of engagement: White ($100); Blue ($250); Orange ($500); and Claws Up ($1000). Once full payments are made, members will receive swag exclusive to the Wildcat Club. White and Blue levels will receive a logo branded cap. Blue level members also receive season tickets. Orange level members receive all the above and a branded polo shirt.

“Louisiana Christian University Athletics has a rich and storied heritage,” said Dr. Rick Brewer, president. “That heritage is often communicated by our alums whose lives were heavily influenced by those who coached at Louisiana Christian University. Our Wildcats alumni can help secure the same kind of character developing experiences and meaningful memories for today’s student-athletes by joining the Wildcat Club.”

Become a Wildcat Club member by going to https://lcuniversity.edu/athletics/ and completing the registration form to get your swag. That way you can help the Louisiana Christian University Wildcats keep their #ClawsUp.