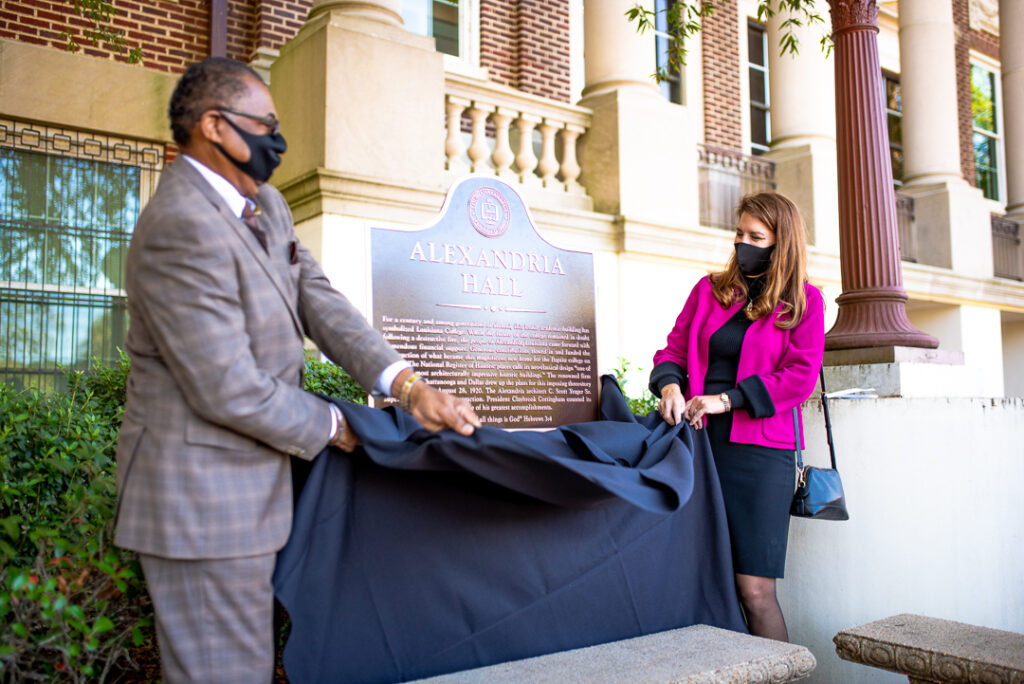 This year’s Founder’s Day ceremony recognized the significant role the city of Alexandria played in establishing LCU’s oldest building, Alexandria Hall, which stands as the centerpiece of the LCU campus.

Each year, LCU holds a special chapel ceremony to celebrate the leadership of those who have contributed to the continuation of the institution over its 114-year history.

Brewer emphasized Alexandria Hall’s role as a representation of hope, faith and investment in the future of the CENLA community for those who planned and began construction of the building in 1920.

“LCU has been an unbelievable fertile seed that has been planted, and it certainly has its fruits that have paid off and are paying off,” said Alexandria’s Mayor, Jeff Hall, the ceremony’s keynote speaker.

Brewer noted the value LCU added to the community, including an intellectual impact, economic benefits through industry and employment, educational contributions through developing job skills and training, as well as influencing the spiritual climate of the community.

As the hub of healthcare and essential services, Alexandria is vital to improving the quality of life for Central Louisiana residents. Hall emphasized the importance of education to the growth and success of a city.

“Your education determines where you will land and how you will spend your life, . . .” Hall said.  “Once one person gains an education and is able to move forward with better earnings, then that family can move forward with a home and better opportunities. When a community or families earn more and have better opportunities, then you create a better city. Louisiana Christian University has made Alexandria a better city.”

Alexandria Hall was paid for in part by the city of Alexandria and Pineville, totaling $100,000 of the $325,000 project. Today, that donation would have amounted to $1.3 million.

“At the time [of Alexandria Hall’s founding], LCU President Claybrook Cottingham, noted the school wasn’t asking for charity or a handout. He called it an investment in Alexandria’s future. He was right,” Hall said. “The result was an ongoing economic impact.”

The mayor referenced a 2018 study by the Louisiana Association of Independent Colleges and Universities (LAICU), which recorded that LCU generated more than $35 million in goods and services, $13 million in new household income and supported more than 350 private sector jobs in the Alexandria and Pineville metropolitan area.

Hall acknowledged, though LCU is located in Pineville, the Red River which divides the two cities does not divide the CENLA community. LCU is one example of how the area thrives in unity.

“The building is a symbol of the partnership that exists between this community and Louisiana Christian University. Alexandria Hall shows us that when we pull together for a common goal, we can achieve it,” said Hall. “It is also a symbol that the city of Pineville and the city of Alexandria are tied very close together for the purposes of supporting the people who live here, who want to get an education here, who want to build their families here.”

Susan Broussard, chief of staff for Hall and a 1992 alumna of LCU, was also a guest speaker at the event. She recalled the impact the college had on her life as a student and in her career.

A commuter from the small town of Effie, Broussard experienced a broadening of her world geographically, as well as eternally through the exponential growth of her faith.

Quoting the author of The Great Gatsby, F. Scott Fitzgerald, Broussard cited how LCU’s liberal arts education provided her the necessary ability to be successful in her personal and professional life.

“The idea that we can hold two opposing thoughts in mind at the same time and still function is the innate ability to have critical thinking skills,” Broussard said. “And with that ability, then you can bring value to whatever job you have.”

Broussard spoke to the essential nature of the exchange of knowledge and ideas between the college and the city, which allows for opportunities to develop. This is an idea she believes to be a priority for LCU and Alexandria’s relationship going forward.

Following the chapel service, Hall and Broussard unveiled a marker outside of Alexandria Hall, marking the 100-year anniversary of its establishment.

Alexandria Hall houses several academic departments, such as Languages and Literature, Business and Education, as well as faculty and administrative offices.

LCU will honor the late Earl Guinn, the longest serving president of the college, in the 2021 Founder’s Day ceremony.