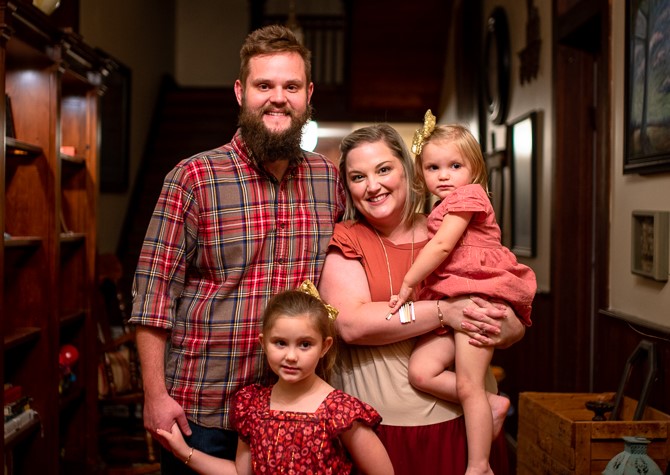 The year 2020 has been confusing and complicated for everyone—in addition to COVID and hurricanes, which affected all of us in Central Louisiana, Alexandria artist Alex Felter had the additional setback of being let go from his job in January.

Felter, a husband and father of two small daughters, wasn’t sidelined for long, though. Fortunately, Alex had a skill set that transitioned well to working from home. Now, he sees quite clearly—2020 has been one of his best years so far.

“It was gut-wrenching at first,” Alex said, “but it’s been the biggest blessing.”

Now a full-time freelance designer and illustrator, said he has been working steady in the midst of a pandemic. His business is Felter Illustration, and his website is felterillustration.com.

“I could see God working through the whole thing,” he said.

Recently, Alex’s work has received a lot of attention from entirely new audiences. 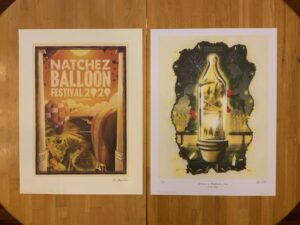 Alex Felter’s winning poster designs for the Natchez Balloon Festival and the Natchitoches Festival of Lights.

The Great Mississippi River Balloon Race is a festival that began in 1986 and is held in Natchez, Mississippi on the bluffs in October each year. It’s an entire weekend of hot-air balloons, live music and festivities that have turned it into the largest festival in Southwest Mississippi.

Alex, a Natchez native, grew up attending the balloon festival as a child with his family, and he has continued the tradition with his own family.

“We were actually at a restaurant at the balloon festival, looking at all the posters they had hanging up,” his wife Lizzie recalled. “And I said, ‘Alex, you could create something really awesome.’”

He said Lizzie’s reaffirmation was just what he needed.

Alex said he had picked up a few freelance design and illustration projects, but he now had time to focus on illustration more, so he could put his all into the poster designs.

Alex is a 2012 Louisiana Christian University graduate in studio and graphic design. His wife, Lizzie Myers Felter, whom he met while both were students, is a 2013 elementary education graduate.

They are parents to Heidi, 6, and Nina, 2. A budding artist herself, Heidi drew nearly non-stop during the interview with her parents. But she did stop long enough to say how much she liked her dad’s balloon poster. 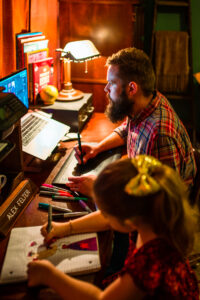 Louisiana Christian University alumnus and Alexandria artist Alex Felter and his daughter Heidi work on art projects together in his home office. Photo by Alena Noakes.

“He’s very good. He got in the newspaper,” Heidi said, referring to the article in the Natchez Democrat about Alex’s poster design. “There’s so much detail, and I like how he drew the people on the ground. They’re so tiny.”

It’s easy to forget she’s only 6 with the detail she notes when looking at her dad’s design. “It’s very pretty with the different kinds of balloons and the colors.”

Alex said he said he would not have had the time to devote to these two projects if he hadn’t been working from home full-time. In addition, being at home with his children, he said he has been inspired by his little artist Heidi.

“I see her constantly drawing,” Alex said with a smile. “I realized I had gotten away from all that. Seeing her joy, it’s been an inspiration.”

He said he decided to enter the Natchitoches Festival, too, because it’s also something he and his family attend each year. He was able to work on both at the same time—deciding on two very different visions for each.

His vision for the Natchez Balloon poster was playful and whimsical, while his design for Natchitoches Christmas was stylish but serious.

“It helped that I did go as a child,” Alex said of the Natchez festival. “It was a joyful time. I remember always feeling warm as a kid and crossing the bridge and looking up and seeing the peanut man balloon.”

He said he wanted to capture the feeling of what the hot-air balloons are looking down on.

“It captures how vast the landscape could be,” he said. “The festival feels large and small at the same time. I wanted to convey being in a hot-air balloon, too.”

The poster includes the people on the grounds and the recognizable columns of the Rosalie mansion.

Mother Sherri Felter almost teared up describing the joy she felt that Alex, who grew up with the Balloon Festival—he was born in 1988, the festival in 1986—had the winning poster this year.

“It’s my favorite; I absolutely love it,” she said. “I can’t even describe the feeling of his being picked. It just thrilled us. It’s an honor and a dream come true.”

For his Natchitoches poster design, he said he wanted to capture his own feelings from that festival, as well.

“It feels elegant going there,” Alex said. “I kept getting images in my head of the lights and a snow globe. So, I decided to create light that is a snow globe. It has a lot of warmth to it, and the colors are somber.”

It was just after the Balloon Festival was over, Alex found out his design had also been chosen by Natchitoches.

The Natchitoches Christmas Festival of Lights began in 1927 and has evolved from a one-day festival into a six-week long seasonal celebration that runs from the Saturday before Thanksgiving through Jan. 6, the Epiphany, and includes more than 300,000 lights and more than 100 set pieces on display every night. It is one of the oldest community holiday celebrations in the country.

In addition to the monetary awards the festivals offer the winning artist, Alex said the recognition and having his work seen by thousands of people at these two outlets, is priceless.

Alex said he always knew he would be an artist.

“I entered art competitions throughout childhood,” Alex said. “I did it because I loved it even if I didn’t win.”

His mother did, too.

Sherri said she kept his first drawing, which he did on a Post-It note in church at age 2. 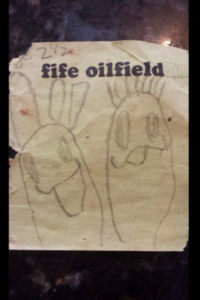 The first drawing by Alex Felter at age 2 ½. His mother Sherri Felter said she knew he had talent even then.

“I had worked with preschoolers for years, and I knew when I saw that drawing at 2 ½ that he was gifted,” Sherri said. “He was incredible. . . the little people, cities, the tree houses. He had such an imagination, and he had a pen and pencil and notepad with him always.”

Nurturing his God-given ability, his parents, Sherri and Ellis Felter, chose to send him to Trinity Episcopal Day School in Natchez for high school because of the art program.

When it came time to choose a college, Alex remembered his grandmother Ann Martin, had always loved Louisiana Christian University.

“She would talk about how she always had wanted to attend college there,” her daughter Sherri recalled. “She was raised Southern Baptist and had attended a camp there in the summer as a girl and it was a special place for her.”

Alex attended Preview Day and fell in love with LCU himself. Fortunately, Ann lived just long enough to see her grandson fulfill a dream of hers by attending LCU.

“She was delighted when Alex decided on LCU,” Sherri said. Her mother died right after he began his freshman year in 2007.

He double-majored in studio art and graphic design, under the tutelage of Tim Roper, whom he still affectionately refers to as “like a god of graphic design.”

Tim Roper said he is particularly proud of Alex’s poster competition designs. “It’s outstanding recognition, and I really love the illustration style he has
developed,” Roper said. “He was a very creative and diligent student in graphic design and had an interestingly quirky sense of humor.”

Alex also noted the care and concern from other faculty, like WangLing Chou, who pushed him outside of his comfort zone but was always there to support him.

“I don’t think I would have gotten that at a bigger college,” he said.

Something else Alex wouldn’t have found at another college—his wife Lizzie, who came to LCU from Lake Charles.

Alex said he gets a lot of inspiration from his wife, who is a fourth-grade ELA teacher for Rapides Parish Schools.

He and Lizzie married in 2011, while still LCU students, and have since planted roots in Cenla. They bought a historic home in the Garden District of Alexandria, and they attend church at The Gathering Place West in Alexandria.

Lizzie said she can tell how happy Alex is working from home.

“I see him doing what he loves and supporting our family doing what he loves. It’s been the coolest experience,” she says of the strange year. “It’s the most we have ever been together as a family, and it’s been a wonderful adventure.” And Sherri and Ellis are so proud of the year their son Alex has had in spite of the setbacks he faced.

“It’s a joy as a parent to see your child accomplish his dreams and see his art escalate,” Sherri said. “I’m excited for the future and what God has in store for him.”