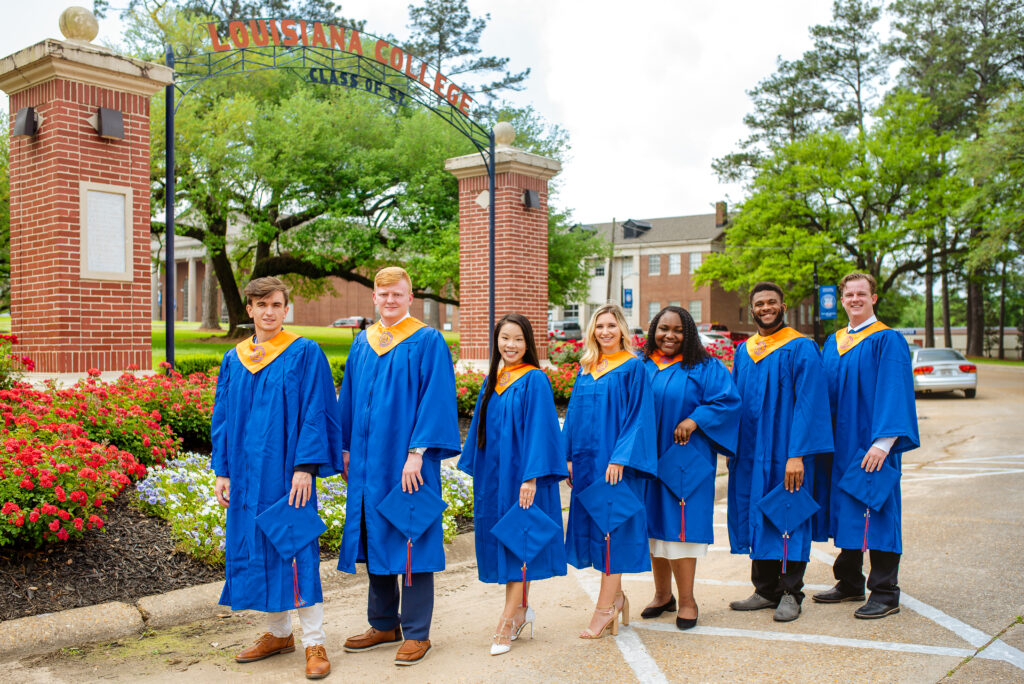 Pineville, LA (LCU News) – Perhaps for the first time ever, a speaker quoted from the mediocre movie “High School Musical 3” in a college commencement address.

In his challenge to the 2021 graduating class at Louisiana Christian University Saturday, Student Government Association President Terrell Phillips told the graduates to “always be grateful” and “keep God at the center of all you do,” and most importantly to remember—from HSM3—“Once a Wildcat, always a Wildcat.”

Louisiana Christian University actually experienced several “firsts” at its 166th Commencement Ceremonies. In addition to conferring degrees upon 178 undergraduates and 65 graduate students at Saturday’s commencement, The College had its first C.S. Lewis Honors College graduates, its first pre-engineering degree graduates and its first student from the Bridge Program to graduate.

The Bridge Program began in the summer of 2017 to give high school graduates who were struggling in English or math skills a jump-start on their college courses by offering intensive remedial work in those courses and to make sure they were ready for success in their freshman courses.

Building on a new tradition begun by President Rick Brewer a few years ago, several student leaders were invited to share a little of their LCU journey with their fellow classmates and attendees.

This year’s graduating speakers were:

They were chosen because of their “and then some” attitude, Brewer said, and “for the enormity of what the Lord has done in their lives and what they have meant in the lives of others during their time at LCU and the gratitude they show in all they do.”

Julius Johnson came to LCU from Kaplan High School in Abbeville to play football, something he always dreamed of doing. What he found at LCU, he said, was an even greater love.

“This is the place I found life in Christ and his salvation,” Johnson said. “I thought that I would just come to this school to play football and that’s it.”

He also found his earthly love—his wife, Nicole Keifer Johnson, who graduated with her master’s in social work Saturday. They married and had a daughter while in college.

“I never thought that I would end up starting a family,” he said. “Louisiana Christian University is and will always be a special and precious place for me, a place where God blessed me with my wife Nicole and my beautiful daughter Alohi.”

Johnson plans to enroll in the MSW program at LCU and play his final season of football.

Bailey Thompson is also not leaving her academic pursuits behind just yet. She is headed to LSU Shreveport to pursue a master’s in business administration with a concentration in health care administration.

She said it was meeting an LCU professor and visiting campus that won her over to come to the college in the first place.

“I loved that the school was smaller, and the class size was not like a big university because I was worried about all the biology and chemistry classes I would take,” Thompson said. “I met Dr. Elliott my senior year of high school, and that started a spark in me. He was so excited to have me as a student and I knew that the professor care for students was unmatched here at Louisiana Christian University. It was after an overnight stay with some students and a few campus tours later that I fell in love with the beauty of Louisiana Christian University and decided to embark on a wonderful journey here.”

David Elliott is the division chair for natural sciences and mathematics.

Thompson said leaving LCU is bittersweet because of the people who have become family to her over the last four years—friends, professors and soccer teammates—have given her many memories to cherish.

“Louisiana Christian University is a place that I can proudly say I will be an alumni from,” she said. “I have grown to be a better person while being challenged in my faith to know the Lord better. I am
thankful for the Lord’s faithfulness in all the testimonies shared as I have traveled the halls of this campus.”

Thompson will not be alone in her continued studies in Shreveport. Aaron Howe, who graduated in biology Saturday, will begin LSU Health Shreveport School of Medicine. Howe plans to become a primary care physician.

Unlike Thompson, however, Howe said he was initially not interested in attending a small college. He received an invitation to compete for the Smith Scholarship, the full-ride scholarship LCU offers to one deserving student each year.

“I came to participate in the competition one Saturday morning and immediately I knew that LCU is where I wanted to be,” he said.

Howe said his time at Louisiana Christian University was transformative in his spiritual life and in his education.

“Within the classroom, I have been blessed to see the glory of God unveiled in his creation in biology,” he said. “Even in my non-major classes I witnessed professors explaining God’s impact on their field of study.”

Anna Matherne echoed the feeling that she knew from her first steps on campus four years ago, LCU was her home. She met Howe at the Smith Scholars competition that day. Matherne was the winner of the competition, earning a four-year full tuition, room and board scholarship.

She also worked as a student worker in President Brewer’s office—doing marketing and communications. And she has already accepted a marketing position with Keystone Engineering in Lafayette.

Lillian Berry, unlike her fellow graduates, said she always knew she would attend Louisiana Christian University. Berry is an LCU legacy—her mother is an alumnus. Berry is headed to Southern University Law Center to earn her Juris Doctorate and Master’s in public administration. Her goal is to work in immigration law.

Jerry Clark and Tanner Guidry were two students who found LCU from hometowns outside of Louisiana. Clark, from Mississippi, and Guidry, from Texas, agreed, though, that finding the school has been a priceless part of their paths thus far.

Guidry transferred to LCU after earning his associates degree at Bossier Parish Community
College. LCU has reciprocal agreements with BPCC and other community colleges to ensure an easy transition for students who begin their undergraduate studies elsewhere.

Even though Guidry hails from Texas, he has decided to stick around in Cenla. He has already begun a position at Calvary Baptist Church in Alexandria as associate student minister and said he will continue to listen to God’s call on his life.

“My journey through college was anything but traditional, but I am forever grateful for the investment and training I received from LCU,” Guidry said. “This place has had such a huge impact on who I am today.”

Even more untraditionally, Clark found Pineville by way of Hollywood.

“I lived in Los Angeles chasing my dreams in the entertainment industry and got engulfed in the scene out there, “Clark said. “Realizing how lost I had become, one day I looked at my environment and those who were around me, and it finally hit me that I didn’t want to be like them. I felt like God wanted to me to do more than this, so I left. I had no idea where I was going to go or what I was going to do as I had planned to never leave Los Angeles, it was always my dream to be there. But God had other plans.”

God’s plans led him to Louisiana Christian University. As he said, the most hardcore shift from his life in Los Angeles.

“Something that shocks me every semester is when I come back and it’s the first day of class and the professor will pray with us,” Clark said. “I cry every time. Coming from places in the entertainment industry and secular culture where I would be judged, berated, scolded, maybe even black-listed for praying with someone or even admitting to being a Christian, that is something that will never get old to me. I will never cease to be thankful for the ability to pray, especially in our university.”