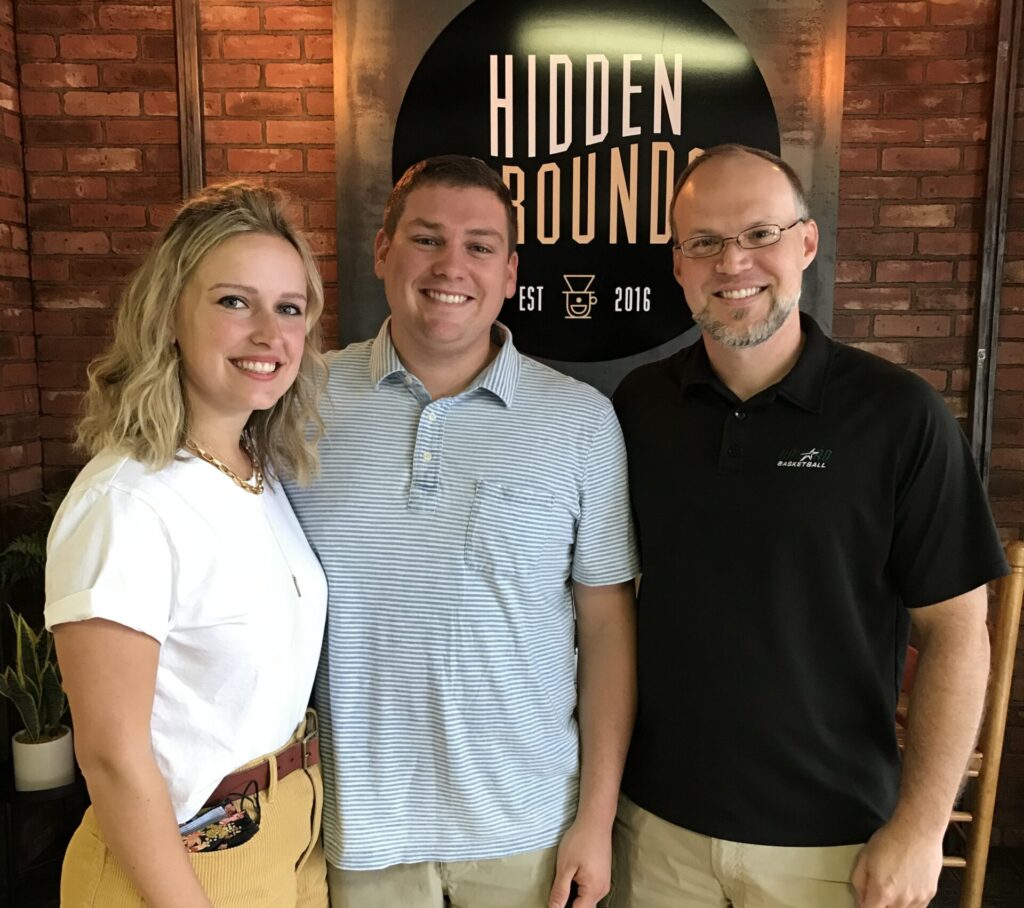 Pineville, LA (LCU News) – From a college class of about 300 in small-town Louisiana, to working with Amazon to deliver smiles. Life since graduating from Louisiana Christian University in 2018 has been nothing short of an adventure for Lake Charles’ natives Grant and Lauren (Hixson) Phillips.

Grant and Lauren Phillips, both 25, say honoring the Lord and having a loving family with a supportive community have brought continued blessings into their young but successful lives.

“We are proud of Grant and Lauren as they represent the ‘best’ of Louisiana Christian University’s alumni base,” said LCU President Rick Brewer. “Indeed, they faithfully amplify the Mission and Vision of their Alma mater by living the gospel of Christ in the place God has called them to serve. I am confident Grant and Lauren are the people they are because of a solid Christian example from Godly parents and the LCU ‘family’.”

Lauren and Grant Phillips hike near their home in Washington with their corgi Kevin.

Family may have played a major role in young Lauren Hixson’s choice to attend LCU, as she hails from a long line of LCU alums. Her great-grandfather James Hixon was, in fact, one of the founding language professors at the college. Her aunt and uncle, Sandy and Paul Hixson, attended LCU, and cousins Meggie and Emma Hixson graduated from LCU. Her uncle Paul Hixson and grandfather Carroll Hixson previously served on LCU’s Board of Trustees. Her father John Hixson is currently serving on the Board.

Lauren and Grant’s parents have long ties, as well. Their parents have been friends since the two were babies in Lake Charles, and the two began dating while students at Barbe High School.

“His mother was my middle school Sunday school teacher,” Lauren recalls fondly. “I was his (Grant’s) seventh-grade valentine.”

Ultimately, they both say they chose LCU because of the experience from their first campus visit.

“I liked LCU because it was not the norm,” Lauren said. “My first time on campus I got to see what it was like and fell in love with the one-on-one interaction.”

That’s just not possible at larger state institutions with tens of thousands of students. Grant agreed.

“You had professors who were on your softball team,” Grant remembers fondly, mentioning History professor Scott Pickard and Missions and Ministry professor Justin Langford.“Professors got invested in whatever we were doing, and that was always very meaningful.”

Lauren smiles as she explains why she considers Langford “complicit” in assisting her in moving the relationship with her future husband along—unbeknownst to Grant at the time. Lauren wanted to get the attention of Grant, so she asked Langford if she could enroll in his Greek class, in which Grant was a student, to try to catch his eye.

Apparently “couples who parse together stay together,” Grant adds.

As she puts it, “it expedited the process,” and before long the two were engaged. She laughs, “We found out the marriage swing does work.”

They married while students. Grant, a biblical studies major, and Lauren, an accounting major, moved from being resident advisers (RAs) in the dorms, to married student housing.

“Grant and Lauren are the epitome of the Christ-centered students we train at LCU,” said Langford, who is now dean of the School of Missions and Ministries. “They excelled at everything they did during their tenure at LCU, whether it was in the classroom or on the intramural field. As a team, they demonstrated Christian commitment to one another and to their calling as students and life-long learners. In my upper-level Greek courses, they both were top-notch students and set the example for others in their studies. It was a genuine privilege to teach and mentor them. I still consider them close friends.”

Listening to what their former professors say about them, one learns they definitely have taken every ounce that was given to them and paid it forward into the lives of those they mentored in college and now in their careers. Lauren was a founding member and the first president of the Business Students Association at Louisiana Christian University. She also served as an LCUPA student ambassador. Grant served as vice president and president for the Christian Vocation Fellowship. Both participated in various honor societies.

“Lauren was one of the most enthusiastic students I have ever met,” said Adena LeJeune, chair of the Division of Business. “She was excited about accounting and her future career and brought that energy to the classroom every day. Lauren’s enthusiasm also served her well in other activities.”

Grant and Lauren recall the times spent pouring into the local church body and support they were given by strong mentors at Longview Baptist Church. They also enjoyed the student activities that bonded classmates. Two of their favorite memories being Cochon de Lait, an annual spring event with all-you-can-eat crawfish, music and fellowship, and Mom’s Weekend, when the male students would toilet paper the pine trees outside Cottingham Dorm.

Lauren says LCU taught her to be curious and to think for herself, which she applies to her everyday life today.

“Every class was intentional,” Grant says. “They weren’t just for a grade or a credit. They served a larger purpose. I have taken the Christian education model I learned from LCU and am replicating it now in my classroom, and I think that’s pretty awesome.”

Authenticity. It’s the theme that surrounds everything the couple say about their education and experiences on The Hill.

“The genuineness—what you see it what you get,” Grant says. “That experience is very authentic to LCU. The professors encourage you to think and consider every perspective. They encourage open dialogue.”

And authenticity is also what one feels from spending just a little bit of time talking to Grant and Lauren.

After graduating in 2018, Lauren passed her CPA exam in 2019 at age 23, the second youngest in Southwest Louisiana, and then completed her MBA in data analytics from LSU-Shreveport. Grant completed his Master of Arts in Teaching from McNeese State University in December of 2020.

Lauren attributes her success in working among such a diverse group of people at Amazon to her critical thinking skills she learned at LCU.

“I learned how to apply and think through situations,” she said. “I work and live among many atheists and non-Christians. I live the Gospel in creative ways.”

Today, at 25, Lauren, Grant, and their corgi Kevin live in a wealthy and culturally diverse community routinely listed as one of the best cities to live in the United States. They love to hike, mountain bike and seek out new adventures.

Lauren works with headcount management and optimization for North America delivery stations under Amazon Logistics. Amazon Logistics is one of the fastest growing sections of
Amazon. She also implements automation, forecasting and employee relations. Her working from home essentials are sweatpants, fast Wi-Fi, and corgi guest appearances in meetings.

They have found a new “home” church, Crossroads Bible Church, where the pair celebrate the opportunity to teach seventh-grade boys and girls many of the lessons they have learned from their lives in church and Christian academic experience.

“There is tremendous value in Christian education,” Grant offers. “When done well, it teaches the whole person, not just the mind, but sparks a transformation on the way you view the world. You may not realize its full impact until you have to weigh out hard decisions in your life.”