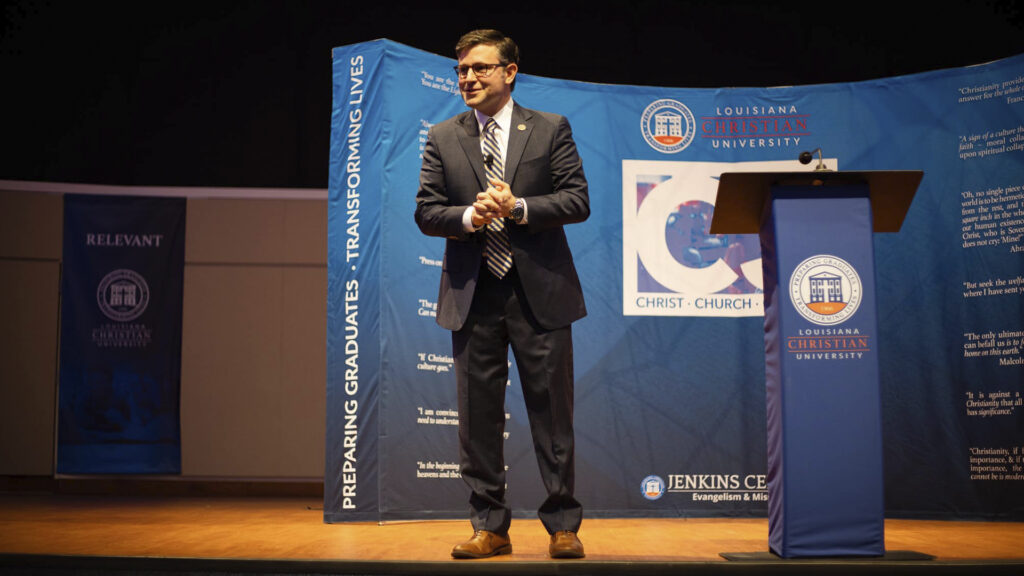 “The foundations of our country are being eroded and intentionally,” Johnson said.

The foundations he mentioned are the basic truths exemplified in the U.S. Declaration of Independence: All men are created equal and have the right to life, liberty and the pursuit of happiness.

Johnson used an illustration to portray where the idea of unalienable rights comes from. Originally, the power for civil government was thought to be from God, to the king then to the people. However, for the first time in history, the U.S. erased the middle man.

According to Johnson, the foundations of the U.S. stem from God, directly to the people. The unalienable rights are irrevocable because they were endowed by God Himself.

As he continued, Johnson explained the problem the U.S. is facing in regards to its foundation. He said the truth decay in America over time has led to the foundational decay of the country.

“The foundational truths that are listed in the nation’s birth certificate, we have rejected collectively as a people,” Johnson said. “Not all of us individually of course. But as a nation, gradually, we moved away from that worldview.”

He said the U.S. has erased God.

“If we don’t have a heavenly boss who tells us what’s right and wrong, then we define it for ourselves,” Johnson said.

He said if you erase the heavenly creator, you lose your individual value, and you are just another social animal—the basis of socialism.

He went on to explain the basic biblical design for human society.

“Basically, God ordained certain spheres of authority,” Johnson said. “The basis of all of them is individual responsibility.”

The three spheres of authority are family, church and civil government.

He said the family’s role is raising and educating children, the church’s role is to take care of the needy and shine the light of Jesus into the culture.

According to Johnson, because of the truth decay in America, individual responsibility has dwindled and caused the role of the family and church to be handed over to the government. Instead of three spheres of authority, we are down to only one.

Johnson quoted some of the advice that George Washington gave the country during his presidency. He emphasized the former president’s idea of religion and morality being indispensable to political prosperity.

“You have to have personal virtue, or our republic is going to stop working,” Johnson said.

Johnson went on to give a rough timeline of the truth decay in the U.S.:

“What we tolerate in moderation, our children will excuse in excess,” Johnson said as he explained the trend found in the timeline.

Johnson used more statistical data to elaborate on the timeline. Today, church attendance has dropped below 50 percent for the first time in U.S. history. Bible knowledge in children has dropped from 70 percent in 1950 to only 4 percent in 2020.

He also included the rise in suicide rates over the last two decades. He explained the root cause of this is the lack of hope because God has been erased in our country.

Johnson said we need to change our approach to spreading the gospel message like the apostle Paul did in Athens in Acts 17. He adapted his message to the culture he was in.

Johnson called us to do the same with our message. He said we need to start at the foundation—there is a God.

“The duty is ours,” Johnson said. “Results are God’s.”

“He was speaking right along with the same lines that we have been addressing since I have been here as president,” Brewer said. “There is truth decay in our culture, particularly in our own country. I am so glad we are a place where students can be challenged to think about these issues and to be reminded of the great documents, the great letters, the statements, everything that shaped this country. Then to be reminded, too, of the role of God and Christ in our culture and in our world.

“We are grateful that we can be a place, arguably, perhaps the only college or university in the state that is going to host an event like tonight, where we cherish God, country, and the freedom that we have in this great nation.”

The audience included community members, along with LCU staff and students.

Senior education major Terika Ford said she agreed with Johnson and that students, even at a Christian university, need to be reminded of our calling to share the truth.

“We are moving away from God, and it’s our responsibility to bring Him back and to remember what our foundations are.”