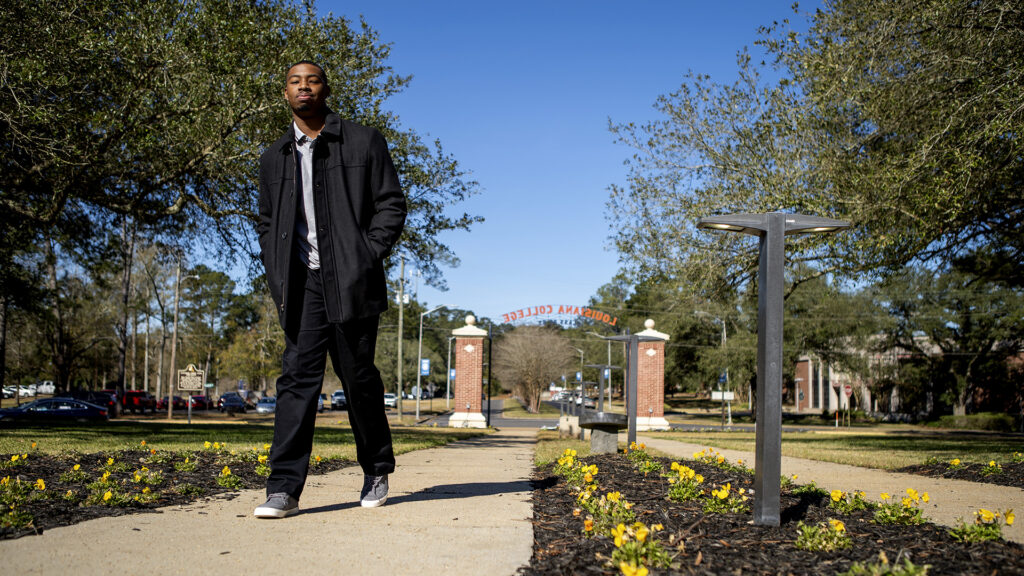 Mention his name to anyone on the campus of Louisiana Christian University—and before the person even says a word, a smile appears. Professor, coach, friend. It doesn’t matter. Powell brings joy to everyone he meets.

A first generation college student from Rayville, James knows the opportunities he has been given and wants to make his parents proud. He is a senior exercise science major planning to graduate in May 2023 and has been the quarterback (#15) for the Wildcats football team the last three years.

His parents, Kerteshia and James Powell Sr., raised him and his little brother, Ja’Marius “JJ”, 15, knowing the value of hard work but also the importance of education. They own and run their own business, J & K Janitorial and Lawn Care.

“They encouraged me to be better than them,” James said. “It’s always been expected of me, that I’d be the one to go [to college].”

A close knit family, James’s mom said they have always looked out for each other, and when James lost his grandparents—one day apart—11 years ago, it was a traumatic experience for him.

Kerteshia said church was an important aspect of the family’s life, and she prayed over her son—that his future would be bright. The family has long attended New Zion Baptist Church in Rayville.

“I think growing up he always wanted to be a pro football player,” Kerteshia said. “However with his seeing his dad being sick I kind of figured his heart would give him a passion to

help others. He has always been there for his father, and I knew that’s where his heart would take him.”

His father has long suffered from kidney failure and is on dialysis. James would often miss hanging out with friends or going to parties to stay home and help with his dad while his mom was at work.

“Funny story, as a young teen he thought he was the rapper Soulja Boy,” Kerteshia said with a laugh. “He would dress up and try to rap. At that moment, I knew rapping wasn’t for him.”

Football, however, was a better fit.

By his junior year at Rayville High School, James had been offered a full-ride scholarship to play football at Southern University in Baton Rouge and a scholarship at Mississippi Valley State University.

“Coach [Drew] Maddox was the first college coach to come see me play back at the end of my freshman or beginning of my sophomore year,” James said. “So when LCU called, I decided to give it a shot.”

Still, the transition to college wasn’t just a change for James, it was also an adjustment for his family.

“JJ was affected hard when James left for college, but James always makes him feel like he’s there for him,” their mom Kerteshia said. “He is respectable, mild spoken, and most of all humble. James is a amazing person. He’s a great son and great older brother. They share a bond that siblings should always have.”

James said he doesn’t take it lightly that he is setting an example not only to JJ, but also to other young people in their community of Rayville.

“I have a cousin who’s a senior, and I’m trying to help him get to college,” he said. “It’s opened a lot more doors by going to college. I want to show others there’s more than the streets and selling drugs—that you can go to college, get a good job and make something out of yourself.”

And James is well on his way. He has been on the Dean’s List twice, once earning a 4.0.

“He’s definitely a role model to his little brother and to us,” Kerteshia said. “The drive and the ambition he has is unmatchable.”

James said the transition from high school to a smaller college has been a great fit for him, and he appreciates the time and attention he gets from his professors at Louisiana Christian University.

“Dr. [Sonia] Tinsley, she helped me get my internship at Mayfield Clinic,” he said. “After one of my football games, she emailed me congratulating me on a touchdown. That’s inspiring for one of your professors to email you after a game.”

The attention of his professors isn’t all he has earned at LCU, however. He also caught the eye of Keonna Johnson, who was a junior social work major, when the two met. He was a freshman.

Keonna, who is in graduate school at Grambling State University, said she is a proud LCU alumna—thankful for the Lord’s direction in her life here educationally—and romantically.

“We did sit on the marriage swing,” Keonna laughs. “It’s a story I once heard when I was a freshman, thinking it was a funny joke, but it seems to be confirmed with every couple I’ve met.”

James points out the two were not even dating at the time. Now they are engaged and plan to marry after he completes his chiropractor training.

“James truly changed me as a person during my last two years at LCU,” Keonna said. “He challenged me to become a better version of myself, not knowing he was becoming a better James by bettering Keonna. He’s confident, my favorite LCU Wildcat, and just all-around a great person. I’m so grateful God placed him in my life.”

“He is amazing! We love James! He is responsible, pleasant, and always goes above and beyond on assignments,” Tinsley said. “He is dedicated and driven to achieve his goal of going to chiropractor school.”

James said he knew he wanted to earn a doctor of chiropractic since his junior year of high school when Talitha Smith Elliott, a chiropractor in Monroe, visited with the football team and did treatments on some of the football players and discussed what chiropractors do and the benefits it can provide.

“I thought someday I might come back to my high school and do this, too,” he said.

Elliott said from the moment she met him, she could tell he was a stand-out.

“I could tell he was special. He was a leader but still very humble,” Elliott said. “He was inquisitive about the treatments and the profession as a whole. I’ve had several students ask me about the chiropractic profession, but he took it a step further by coming to the clinic and actually shadowing me. To take that kind of initiative and actually follow through with it, spoke volumes to me. His intellect, unrelenting work ethic and passion for the profession has me excited about his future. I strongly believe not only will he be successful in chiropractic school, he will be a standout in the profession.”

He credits the Christian values his parents raised him with as a large part of who he is, and he knows his days at LCU are short. He has one season of football left and plans to graduate in May 2023. Then it’s off to chiropractor school.

One thing is clear, though. No matter where he goes from here, he will remain steadfast in his purpose.

James knows who he is, where he came from and who he represents, and he remains grateful for it all.