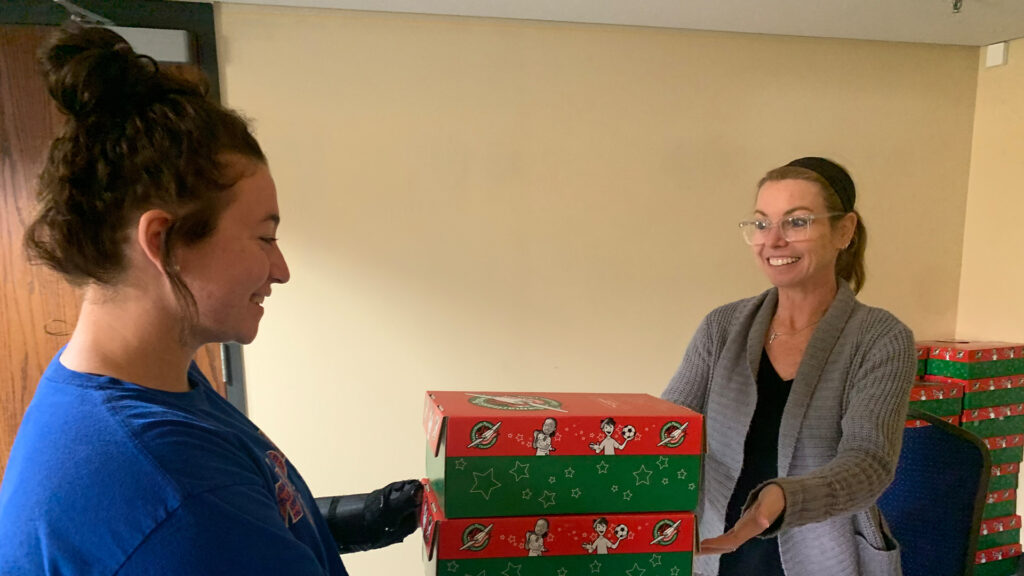 For most of us in America, the holiday season is the most wonderful time of the year. Not only are we thankful for the birth of our Savior, but we are thankful for the time we get to spend with family and friends. And we often show that gratefulness by exchanging gifts with one another.

But for many around the world, this is not the case. Operation Christmas Child, a ministry of Samaritan’s Purse International, began in 1993. That first year 28,000 shoeboxes were filled with gifts for children in war-torn countries. Since then more than 188 million children in more than 170 countries have received shoeboxes filled with toys, school supplies and personal hygiene items.

The project delivers not only the joy of what, for many kids, is their first gift ever, but also gives them a tangible expression of God’s love, according to the Operation Christmas Child website. Volunteers from local churches around the world partner with OCC to present the Gospel of Jesus Christ at outreach events where children are surprised with shoebox gifts.

“This has been a ministry that has been in my family for many years,” Huffman said. “My mother-in-law Rita Huffman has been having shoebox packing parties at her house since my children were little.”

Rita Huffman is the regional liaison with Samaritan’s Purse for Central Louisiana.

“For the last few years I have felt that Holy Spirit tug to get something started on campus,” Tabitha Huffman said. “It gives students an opportunity to participate in ministry on

campus for those who may not have the opportunity to go elsewhere. I had no idea how many people would jump on board.”

The LCU softball team packed 40 boxes—one for each player on the team.

Head Softball Coach Barry Roberts said his team has been doing this service project for a number of years and delivering the shoeboxes to a Pineville church.

“We all, my kids and staff, understand the fact that giving is such an important part of being a servant,” Roberts said. “We just want to continue to do this with all of our service projects. It just seemed natural, that if the school was going to do this, that we would give to that rather than just taking the boxes to the church. Our kids and staff do a number of service projects each year (some big, some small) where we try to give back to our community that supports us so well.”

Noel Schonhoff, a junior softball player from Slidell, said she loves getting involved in helping others.

“This is a way to give back and to share the love of Christ to them [children],” she said. “This will probably be the light of their month and put a smile on their face. The team does something every holiday season.”

Tabitha Huffman said the goal for LCU’s shoebox drive this first year is 100 boxes. Next year, she hopes to have a year-round drop-off for items to put in the boxes, so when people come to events in the Martin Performing Arts Center they can make donations