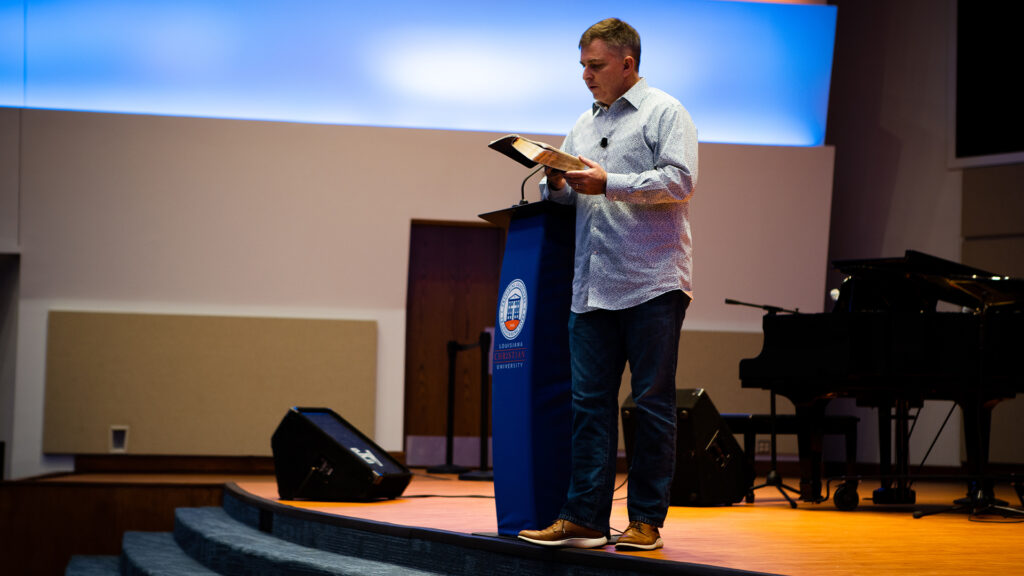 He spoke today on Revelation 1:1-8, as the first speaker on the Book of Revelation, which will be the subject of each Chapel of the 2022-23 academic year. Four years ago LCU President Rick Brewer began choosing a single book of the Bible for extensive study for the year.

“Hopefully, you all come to this university with the end in view,” Horn said to those in attendance. “Not just graduation, but education and learning—to make a contribution to this world.The decisions you make this week and in the weeks to come, the years to come, are progressing you to the end in view. Revelation is the kind of book that calls on us to have the end in view.”

Brewer said the Book of Revelation is often misunderstood and therefore neglected, but Dr. Horn made it even easier to understand and approach with his message emphasizing the overarching themes of the Book.

“Our chapel experience today at Louisiana Christian University was a  worshipful time of praise, prayer and proclamation unlike any I have ever sensed at the University,” Brewer said. “God is definitely at work on our campus. It’s encouraging to witness our students, faculty and staff coming together with a genuine sense of expectancy that the Lord is meeting them here at this time and place. “

The lessons in Revelation, Horn said, allow believers to go through life’s trials with the end in view.

John Caleb Howe , a senior secondary education major, said it was a great choice to cover the Book of Revelation across the school year in Chapel.

“Not a lot of people in today’s society know about the truths and prophecies told in Revelation,” Howe said. Some people are scared to read it ecause of what it tells in the end times, but it is necessary to be taught. As a Christian, follower of Christ, it urges me to share more about the Gospel so the ones I love and I come in contact with know what’s truly coming. I personally want them to be ready for Jesus’ second coming.”

Korey Kincade, a junior Missions and Ministries major agreed that it was an unusual choice because of its difficulty, but is excited about the journey.

“I’ve personally read through the book and think that it is a great study for college students especially for the times we are in,” Kincade said. “I also think that it is a very eye-catching book and interesting for us as students as opposed to reading something we study all the time like the Gospels or the Epistles.”

Horn used his time covering what he called the “prologue” to the book to offer seven things to watch for in Revelation.

Revelation 19:6 is an exclamation of the sovereignty of God. “Hallelujah! The Lord our God, the Almighty reigns! It’s not only the conclusion of Revelation. It’s the conclusion to all of life.”

Jesus is the hero of the story, Horn said. “He gains his supremacy because of his sacrifice in Chapter 5.”

Chapters 6-19 cover the three Cycles of Judgment with seven parts in each of the cycles.

“God is bringing about eternal judgment,” Horn offered. “He isn’t desirous of the judgment because He pauses along the way, but the pause will not last forever.”

Revelation will show God is in charge of bringing it all to a conclusion, Horn said.

Revelation ends on this note, he said.

Revelation will show that this is God’s desire.

Horn concluded with explaining why all this matters to today’s young person—what he called the “So What?”

First, he said, commit yourselves to live in worship.

“The endeavor of our lives should be to worship Him,” Horn said. “We worship toward the end—not in the immediate we may be going through.”

Secondly, he encouraged all to live in surrender.

“Our lives must be surrendered to Him,” Horn said. “Someone or something sits on the throne of your life and heart. Is it God?”

Third and finally, Horn told the students to live their lives with a sense of urgency.

“We don’t know what part of the story [Revelation] we are in right now,” he said. “The Lord is returning at a time we do not know.”