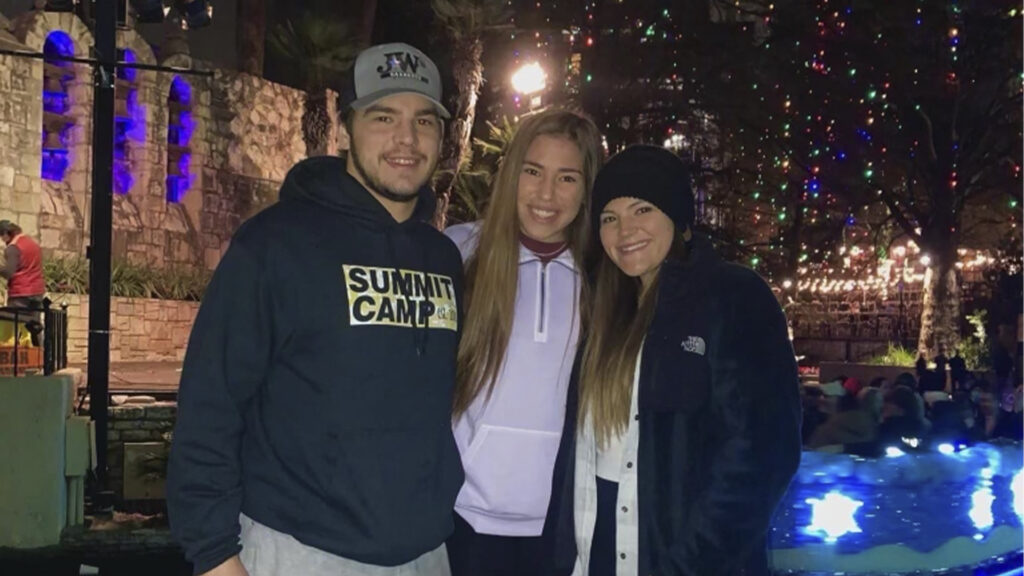 They say everything is bigger in Texas, but the three Woods siblings might disagree. They found their college home in small town Louisiana.

The mysterious ways of the Lord and a dedicated father brought Krissa, Jonathan and Jaycee Woods, and they say the Louisiana Christian University campus community and welcoming faculty and coaches kept them here.

Krissa, the eldest sibling, was a high school senior in 2017 at Mount Pleasant High School in Texas with no specific future plans other than to play college soccer, she said.

Knowing this, her father, Donald Woods, was diligently searching for ID camps that could help Krissa pursue her dream. ID camps help high school athletes get their name out to college coaches in hopes of being recruited to play.

He happened on Louisiana Christian University – some 250 miles away – that was hosting a camp. After doing his research on the school, he and Krissa’s mom Amanda decided this was a good camp for Krissa, who hesitantly agreed.

Krissa enjoyed the camp so much, she accepted an invitation to attend LCU’s Spring Preview Day, where she met and heard President Dr. Rick Brewer speak and interact with the prospective students.

“It was the coolest thing because I hadn’t seen anything like that at college before,” Krissa said, in reference to LCU having a worship service during Preview Day.

Krissa said Brewer was so encouraging to the students that she felt that LCU was where the Lord was leading her to attend college and to play soccer.

“Krissa is a person that will put everyone before herself, that is loyal to her friends and will do anything for them,” said Carla Tejas, LCU’s former women’s soccer coach. “She is there for the team in the good and the bad, and that is what I admired about her.”

Krissa, now 23, completed her Bachelor of Science degree in biology and is now pursuing a Master of Educational Leadership at LCU.

“The Woods siblings have been and are still wonderful additions to the University,” Brewer said. “They’ve discovered what many other Texans know that LCU provides an excellent, affordable Christ-centered education equipping students to serve in any and all culture-shaping venues.”

Two of those, younger brother Jonathan and little sister Jaycee, grew up traveling when they could to Pineville to watch Krissa play soccer, and during some of those visits, they got the chance to see what Krissa had experienced on her early visits to the LCU campus.

Jonathan said he already felt connected to LCU through meeting some of the professors in the Missions and Ministries Department, so he prayed for God’s direction to make it clear where he was meant to go to college and to make the finances available.

Just two weeks before LCU’s Freshmen Move-In Day and the start of the fall 2019 semester, he received word that LCU was offering exactly enough in scholarships to cover his tuition.

“Someone told me, ‘You shut the door, and God opened the garage door, and you need to walk through it,’” Jonathan said. He knew the Lord has answered his prayer.

Jonathan, now 20, is a junior missions and ministries major and said he has always known he was being called into the ministry in some capacity.

He also said he feels that LCU makes it possible for students to have a more personal and genuine connection with professors unlike some institutions.

“Professors at LCU genuinely care about the well-being of their students and want to help in anyway they are able to,” Jonathan said.

A prime example, Jonathan said, is when Dr. Justin Langford, Dean of the School of Missions and Ministries, opened his house to a group of his students to socialize over “S’mores.”

“The Lord has been working behind the scenes very evidently in the roles and opportunities that I have,” he said.

One such opportunity was serving as an intern for the Baptist Collegiate Ministry on campus.

“Jonathan is a mature, hard-working student who exemplifies Christian character and often can be found encouraging others,” Langford said.

Once Jaycee, 18, was ready to make her college commitment, she knew that her siblings and soccer were where her heart was.

Fortunatley, then soccer coach Tejas, who was already acquainted with Jaycee through her sister, Krissa, and knew of Jaycee’s desire to play at the next level, watched her films and made her an offer.

Jaycee said she was excited when she was offered the chance to play on the same team as Krissa, as they had never experienced that before because of their age difference growing up.

“Jaycee’s soul is so noble,” Tejas said. “She brings into the locker that unity that every coach wants in a player. The Woods family has raised amazing girls that Louisiana Christian University is lucky to have.”

Jaycee recently completed her freshman year as an exercise science major with a concentration in clinical wellness. She said she always knew she would go into the medical field in some way. She had already received certification as a medical assistant by the time she finished high school.

Jaycee said she has always had a passion for sports, as well as learning about the different aspects that play a part in the body such as bones, nutrition, muscles and all that encompasses the body.

Being so far from home for college has presented challenges for the Woods siblings, but they count it all joy.

Even COVID-19 turned out to be a blessing, they said, in that the move to online classes in the spring of 2020 allowed them to be home in Texas to spend the last few weeks of their grandfather’s life with him.

That April, they learned that their grandfather had a brain tumor and was given three months to live by his doctors. The quarantine allowed them to have extra time with their grandfather before he died in June and also allowed them to be together with family. Had they not been home isolating, as the entire country was, they would have been hundreds of miles away in school.

“The Lord specifically used all of that, with all the bad and ugly that came with COVID, how He was using it for his glory,” Jonathan said. Even so, the Woods’ were happy to return to campus as restrictions eased.

Each sibling has many reasons for why they enjoy being at LCU together. Krissa smiled as she said she enjoys when Jonathan texts her and Jaycee to tell them he has leftovers for them.

Jonathan is grateful to not only be a part of his sisters’ lives, but also to be involved in their lives, too.

Jaycee loves having her older siblings at the same university because they are always there for her, whether they are giving her advice, encouraging her, or just hanging out.

“It’s about always having a shoulder to lean on,” she said.

The Woods siblings have grown closer since being at LCU. They make it a priority to hang out if they haven’t seen each other because of their busy schedules. They enjoy being able to experience college with each other.

Krissa said whether they are home in Mount Pleasant, Texas, or here at Louisiana Christian University, her siblings will always “her home.”

“My time at LCU has flown by; I blinked, and it was gone,” Krissa said. But she has learned some valuable life lessons. “You’re only going to get out as much as you put into something. That goes for classes, work, or anything that you’re involved in.”

Everything that LCU teaches their students is to prepare them for their futures after graduation, Krissa said. Even if a student has no idea where life will lead them, it is important to learn from everything they have endured.

“It’s what we’re called to do as Christians” she said. “We know that this is what we should do for ourselves and for the Lord. As Christians we should want to better ourselves for what God has in store for our future.”

Jaycee said the biggest lesson she has learned so far is to work hard at everything she does in order to be successful. She is grateful for the enormity of resources LCU makes available for student, such as the Student Success Center and the Center for Calling & Career, as well as many, many more.

“You can’t be lazy, if you want to earn something,” Jaycee said.