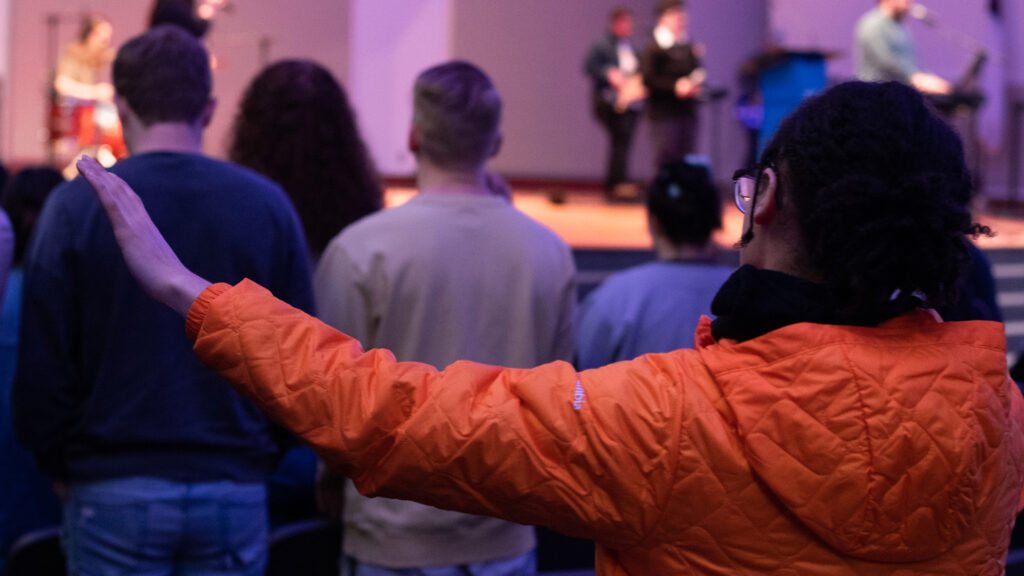 “I was here when we brought Dr. Brewer on, so to be able to come back in this capacity is super exciting,” said McGuffie.

McGuffie was asked to speak on Colossians 4:7-9. His approach to this passage of scripture was to break down the three personalities mentioned in it: Paul, Tychicus and Onesimus. Each day is dedicated to studying one of them.

“We know great movements of renewal and revival have often launched from an university campus,” said LCU President Rick Brewer. “And that’s the hope and posture of prayer we approach this time set aside in our university life for more intentional focus on redemption and reconciliation. Praying for the power of the Holy Spirit to be experienced through the worship and preaching of the Word.”

On Tuesday, his sermon consisted of several different portions of New Testament scripture that gave context to who Paul was before he had a moment with Jesus that transformed his entire life, trajectory and purpose. McGuffie drew from scriptures in Acts to explain who Paul was before his conversion on the road to Damascus. His name was Saul and he was known as a persecutor of the church. He said in that moment on the road to Damascus, God changed everything about Saul’s life. He then used verses from books that Paul wrote to describe who he became after a moment with Jesus. “You’re talking about going from holding the coats of the people throwing the rocks at Stephen to holding a pen and writing the book that we read out of this morning,” McGuffie said.

He said there have been many people who told him that their life is too dark for God’s grace to reach them. He said his response to them is always “consider Saul.” McGuffie said a moment with Jesus is all it takes to change the trajectory and purpose of someone’s life. It does not require things of the world such as self-help books, behavior modification or anything a person can do on their own; only a moment with Jesus.

“There are opportunities all around you that god can change your heart and launch you into a new purpose to go and impact and change the world, but it starts with that moment with Jesus,” said McGuffie.

According to Justin Langford, the Dean of the School of Missions and Ministries, LCU’s revivals give students and faculty an opportunity to come together more than once to experience God through singing and the reading and preaching of his word.

“The thing I love most about revival is just the sense of community,” Langford said. “We have that here on campus, but I think it adds to that in a spiritual sense.”

Students and faculty alike thoroughly enjoyed McGuffie’s presentation of the Gospel Tuesday morning and said they look forward to the rest of the week.

“I thought he did a wonderful job,” said Nicholas Maricle, assistant professor of missions and ministries. “I’m excited about the rest of the week and praying that people make decisions.”

Junior public administration major Benjamin Menard said he liked that McGuffie kept the sermon to a few points and kept the audience engaged.

“I liked how he was able to pinpoint portions of scripture and relate it to other portions,” Menard said. “We don’t have a lot of people that come and do that often.”

“You can definitely tell that this speaker has a God-given talent for teaching the Word because I was invested the whole time,” Quartemont said.

If you were not able to catch Tuesday morning’s service, there are two more opportunities this week to hear McGuffie speak. Wednesday’s sermon will be on the personality of Tychicus and Thursday’s will be on Onesimus. Both services begin at 11 a.m. in Guinn Auditorium.

“I hope you come excited and come expecting God to speak through his word,” McGuffie said. “Paul is a great example. These other guys are great examples. No matter who you are on campus, God’s going to use his word to speak into your life. So, come and see.”