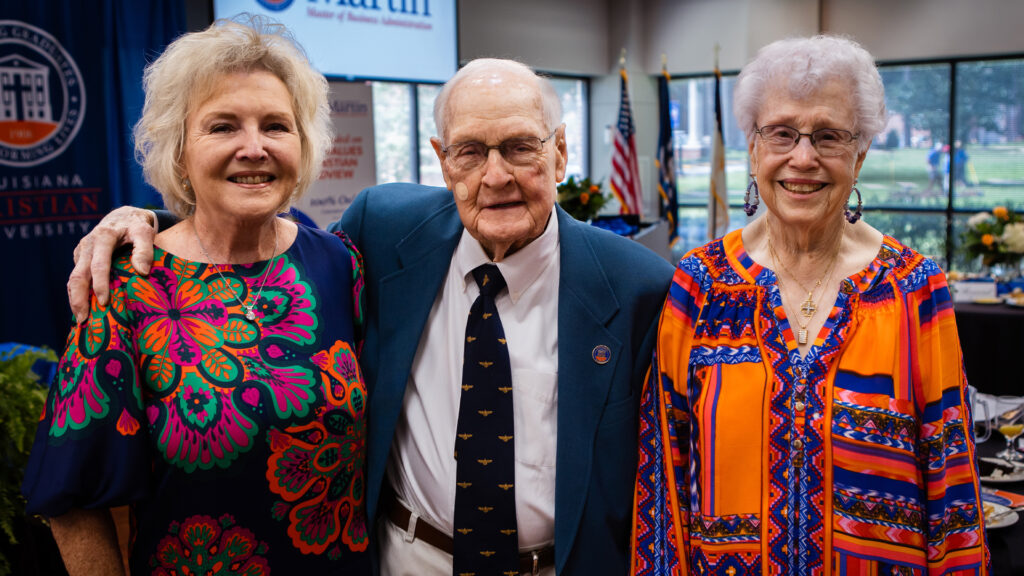 It was clear by the outpouring of support from the business, academic and civic community that Martin was a universally admired business leader and man.

Martin, who died in 2019, was chairman, CEO and former president of RoyOMartin.

“This program is so vital for this community,” he said. “There are many with MBAs that are leading the [RoyOMartin] company into the second century of business. Johnny challenged his family to be the best they could be. This MBA program will do that for students.”

The Martin MBA program is rooted in a biblical worldview and includes the RoyOMartin RICHES framework as a thread throughout the entire program.

The RICHES framework was established by Roy O. Martin Sr. as the values the company would operate under. He saw them as the company’s “riches.”

Martin III spoke about 1 Samuel 7:12 and how Samuel erected a stone, called Ebenezer, meaning the stone of help, to remind the people of God’s help in defeating the Philistines. He explained that RICHES is his Ebenezer.

“This MBA program named after Jonathan Martin will be that stone,” he said. “It will mark a path we all should take. Future business leaders coming out of this godly program have the potential to build businesses that provide thousands of families with great jobs, great healthcare, great profit sharing and great scholarships for their higher education.”

Chris Karam, president and chief executive officer of CHRISTUS St. Francis Cabrini Health System, said that the program will be beneficial for growing leadership roles in local hospitals to elevate the level of care offered to the community.

“I want to compliment the Young family for starting the MBA program,” Karam said. “What a wonderful gift to give to this community, now and for the future generations. And for the Martin family, you couldn’t have a better role model than Mr. Martin to learn off of and what he aspired others to do as leaders. So, were super excited to be associated with the organization.”

Keith Adams, incoming president and CEO of the Central Louisiana Community Foundation, spoke briefly about working with LCU and connecting donors to causes they care about.

“I’m grateful for our partnership with [LCU] and I look forward to many more partnerships moving down the road and supporting this great institution,” Adams said.

Jonathan E. Martin’s daughter Amanda Vincent, founder of Studyville Academic Workspace, spoke on behalf of her and her sister, Natalie Monroe, vice president of environmental, safety and sustainability operations for RoyOMartin, of their father’s legacy.

Martin’s wife of 48 years, Dr. Maggie Martin, told the audience of how the partnership with LCU came about.

“From the time Johnny died, I knew I would find something to honor him and continue his legacy,” she said. “He had innate business acumen. He empowered people and showed them how to succeed. His life verse was to whom much is given, much is required—it was his blueprint for living. He would be so honored and humbled by this.”

LCU President Dr. Rick Brewer worked alongside the Martin family and Dr. Kenny Holt, dean of the Young School of Business, to develop the MBA program.

“To name our MBA program in honor of such an iconic businessman and outstanding resident of Central Louisiana seemed fitting,” Brewer said. “We are honored to help carry on his legacy of Christian leadership at LCU.”

“We knew we wanted to incorporate biblical truths and virtue in the program,’’ Holt said. “This program has the core content of every other MBA program, but the difference is we teach through the lens of virtue and character. We reflect the character of Ray and Dorothy Young and Jonathan Martin’s legacy.”

The Youngs are the namesake of the School of Business.

“We are honored to continue that tradition and grow students who will follow those same traditions,” Holt said.

Current MBA student Jeff Van Handel, a combat veteran who retired from the U.S. Army in 2016 and LCU alumnus, spoke on his experience thus far in the inaugural cohort.

“All the coursework is relevant to the world today,” Van Handel said. “The impact this program is going to make on future Christian business leaders is truly amazing.”

The program concluded with a surprise announcement of a gift from Natalie and Darryl Monroe to launch the Dr. Maggie Martin Marketplace Leadership Summit, which will be an annual spring event for business and industry leaders in Central Louisiana who live out faith in their work